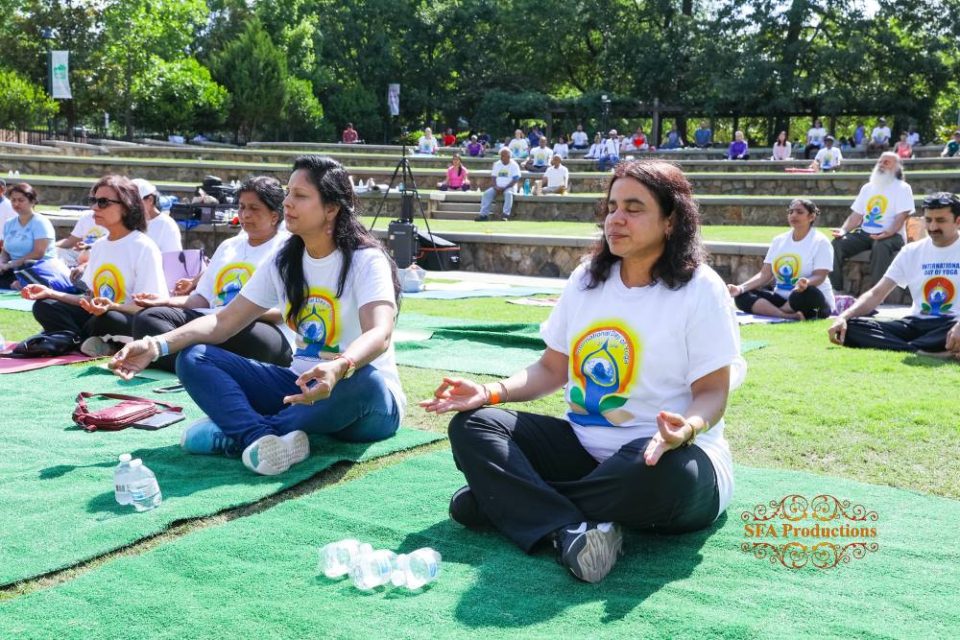 “I wish you to be the Yogi in the people’s movement of yoga,” stated PM Modi in his video address, urging people to set goals in generating a general consciousness of yoga and converting it into a mass movement. “

Yoga has connected the entire world, just as it connects mind, body, intellect and soul. It is the medium to experience and realize how holistic life can be lived in a balanced way. Practice of yoga can lead the mind, thoughts, and behavior to an inward journey of healthy and pious life,” remarked PM Modi, adding that it was important to embed yoga in daily routines to remain stress free amidst difficulties.

“Through yoga, we remove life’s imbalances and we provide ourselves with self-assertion, self-expression and self-actualization,” stated Dr. Kulkarni in her address, wishing everyone a happy and healthy Yoga Day. Underlining its significance, she noted that Yoga is a science, a way of life, and a philosophy that proves to be beneficiary in all aspects, be it physical, mental, moral, spiritual, or social. Throwing light on the techniques, Dr. Kulkarni elaborated on the usage of Asanas, the Pranayama (breathing technique), and Dhyana (meditation), adding that the Saatwik (Vegetarian) diet was considered most beneficial. Emphasizing religion has nothing to do with yoga, Dr. Kulkarni said yoga helps promote communal harmony, cohesiveness, national harmony, and world peace. “Let’s make Yoga viral. Let us also contribute from our corner of the world” urged Dr. Kulkarni adding the crowd was joined by 170 consulate missions across the world.

Celebrating his birthday at the event, Mayor Paul greeted the gathering with a Namaste. “What a beautiful sight and what a marvelous day to celebrate the IDY, which is one of the highlights of our year in our community. We love having the Indian Consulate in our community here, “he said commending Dr. Kulkarni and the previous Consul-Generals.

Followed by chanting of the Gayatri Mantra by members of HSS, emcees Dr. Somveer Arya, current teacher of Indian Culture and Yoga in the CGI Atlanta, under MEA, and Vrishali Deshpande Angara, along with some volunteers guided the attendees in performing various Aasanas in accordance with the Common Yoga Protocol, created by the Indian government. Starting with loosening the body, the practice continued with standing postures Tadasana, Vrkasana byVedic Temple, sitting postures Sasakasana, Bhadrasana, by Lifetime group, Prone and Supine aasanas, Makarasana and Setubandhasana by HTA and CM, Kapalabhati by Patanjali, Surya Namaskar by HSS, Guided Meditation by Art Of Living (AOL), Dhyan by Heartfulness, Laughing Yoga by Yoga in Daily Life, inner awakening by Sahaj Yoga and  ana-pana-sati breath meditation by Pyramid Spiritual Society. Demonstration of the complicated Nauli Kriya (abdominal cleansing) by Dr. Arya garnered much appreciation.

Consul Lakhtakia thanked everyone in his Vote of thanks address. The event concluded with the closing sankalpa by HSS volunteers, and the shanti mantra by Sadhvi Prempu.