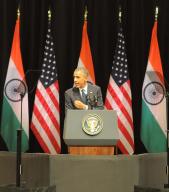 New Delhi, Jan 27 (IANS) That US President Barack Obama knows how to work the crowds was evident from his address at the Siri Fort Auditorium where he had a predominantly young crowd screaming out his name, repeatedly applauding him and vying with one another to clasp his hands as well as that of his wife Michelle when both of them came down to interact with the audience.

The hour-long, townhall-meeting style event, was punctuated by repeated applause – almost every few minutes – as Obama spoke about the dreams and opportunities for the young, the diversity of both the US and India and the time for the US and India not just to be “natural partners” but “India’s best partner” on a range of issues from education to environment, fron infrastructure to counter-terrorism.

Right fromt the beginning, when Neha Buch, a young representative of Indian NGO Prabha, introduced Obama to the audience as a man who is known for his empathy with common people, Obama was at his best as he connected with the crowd at the over 1,900-capacity tiered hall, talking about a greater role for India in the Asia-Pacific region, and immediately with the audience by talking about his own humble roots which he said were in many ways similar to the roots of the Indian prime minister.

“If the grandson of a cook can become president, and the tea seller can become the prime minister, so can young people from the humblest of origins dare to dream big and realise their aspirations,” he said to loud cheers and applause.

He also talked about the importance of women in society and said a “nation is successful when its women are successful”, a remark which again drew strong applause as he talked about how impressed he was with the “incredible women in (India’s) armed forces” that he witnessed at the Republic Day parade Monday and also mentioned about the women officer – Wing Commander Pooja Thakur of the Indian Air Force – who led the guard of honour at Rashtrapati Bhavan at his official welcoming ceremony Jan 25.

After the address, the Obama walked the stage to loud applause, came down and then went around meeting the audience in the first row with excited youngsters particularly jostling to reach out to their hands, as they happily pumped flesh for nearly 10 minutes, and taking their pictures on their mobile phones.

As the Obamas went around, the sound system erupted with popular song from the hit Aamir Khan starrer “Lagaan” – O mitwa, sun mitwa, tujhko kya darr hai re
Dharatee apanee hai, apana ambar hai re, tu aaja re – which extols the virtues of friendship and partriotism, making it a day that many in the audience would remember.

As a young woman was overhead remarking excitedly later on, “If Obama would stand for an election in Delhi, I would definitely vote for him.”

A US journalist, who was part of the White House press corps travelling with the president, said: “Looks like he is a highly popular man here!”