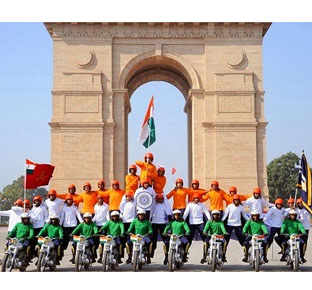 Think India, and two words spring up in mind – Democracy and Republic. That India is the world’s largest republic is common knowledge. What, however, is lesser known is that republic is in India’s DNA.

We had republics in India prior to the oldest known republics like  classical Athens(508 – 322 BC) and Roman Republic(c.509 – 27 BC). Many Indian republics  preceded these,  most notably the Vaijjian confederacy in Vaishali (inBihar) around 600 BC in the times of Lord Buddha. Since then, we have recurring evidence of republics in India. In 1830, Sir Charles Metcalfe, the then acting Governor General of India wrote, “The village communities are little republics, having nearly everything they want within themselves and almost independent of any foreign relations.” It is these self contained, self governing village republics that have ensured the continuity and survival of the the great Indian civilization which even the mightiest of empires  could never penetrate.

Today the biggest republic of the world envelops in itself half a million tiny village republics managing their affairs through self governance called the Panchayati Raj ( the rule of the village community).India now basks in 64 years of republican glory. It will be interesting to retrospect over these momentous years.

A vibrant electoral democracy has been India’s most enduring and endearing identity ever since India adopted a  great constitution that made it a democratic republic with universal adult suffrage.  This  was considered by the developed countries as a foolhardy misadventure. Their skepticism was based on the ground realities of the time. India had just got devastated by a deadly partition in which millions of lives were lost. It was an unequal, fractured caste based hierarchical society with 84% illiteracy and extreme poverty. How will they rule themselves?

The prophets of doom were silenced before long.India took to democracy like fish takes to water.

Adjusting  itself to the new environment of freedom and democracy in no time. India went on to  prove Nobel laureate Amartya Sen’s famous statement that a country does not become fit for democracy, it becomes fit through democracy.

Over the past sixty four years, the Election Commission of India  has delivered sixteen elections to the Lok Sabha (the House of the People) and over 360 elections to State Legislative Assemblies without missing a single deadline. Peaceful, orderly and democratic transfer of power has been the envy of the entire democratic world. The outgoing prime minister ( or chief minister) offering the chair to the incoming one with humility and folded hands has been a sight which many democracies only long to  see.

The fourteenth General Election in May 2014, was the biggest election in world history. As many as 554 million of 834 million registered voters exercised their franchise at 931,986 polling booths on 1.8 million electronic voting machines (EVMs). In sheer size, the Indian electorate is bigger than the combined voter population of each continent. In fact, it is like 90 countries rolled into one, not just in terms of numbers alone but the complexities as well.

And the numbers are always growing. GE 2014 saw the addition of over 118 million voters since the last General Election in 2009. In terms of the voting population, this is like adding an entire Pakistan, or South Africa and South Korea combined, or three Canadas, or four Australias, or 10 Portugalsor 20 Finlands!

India is undoubtedly the most diverse country in the world -multi-religious, multi-cultural, multi-lingual, and multi-ethnic, besides geographical diversity (deserts, mountains, plains, forests, islands, and coastal areas). We have all the world’s major religions, 22 official languages and 780 spoken languages.  The demands of this diversity can be mind boggling. Equally difficult are the other challenges of fighting terrorism, security threats, adjusting to globalization and rising expectations of IT savvy growing middle class.

Inclusion and Participation the key features of the republic

Elections can be truly free and fair only if these are inclusive, socially just and participative. During the sixty four years of our democratic history, the voter turnout has remained around 55-60%, definitely far less than what ECI aspires to achieve. To address this, ECI came up with a Systematic Voters’ Education and Electoral Participation (SVEEP) wing that rolls out multi-media campaigns to bring all citizens, especially the urban upper and middle class, the youth and women, into electoral participation. Dramatic results followed. During the last four years every state and the national election saw record turnouts, in most cases highest in history!

National Voters Day was one of the highlights of the program focusing on the youth turning 18. A drive was launched to locate such youth well in advance and on 25 January ( the founding day of the ECI) at  felicitations organized at all the 800,000 polling stations to be celebrated as the National Voters Day (NVD).

The first NVD was inaugurated by the President of India on 25 January 2011, in the presence of Chief Election Commissioners of over thirty countries. The beauty of the program is that for this countrywide celebration, not a single extra rupee was demanded. We used the normal funds for electoral registration activities but converted it into a major national ‘event’. Many countries evinced interest in this unique, zero cost but effective model and some subsequently adopted it.

Managing elections  in  a  country  of  subcontinental dimensions  cannot  be  done  easily  without the  application of every possible technology.  This  has brought great  efficiency in the electoral process. These technologies are rigorously field- tested before adoption to ensure absolute reliability. We have seen many elections in several countries collapsing because of hasty introduction of untested technology.

EVMs  have  been  used  in  all elections  to  Parliamentary  and  Legislative Assembly constituencies since November  1998. It has revolutionized counting, making it  quick, peaceful, efficient and free from invalid votes. The counting day disputes and tensions have just disappeared. No surprise that it has come to be described as a wonder machine of Indian democracy. Many countries have adopted these like – Bhutan, Nepaland Namibiawith many more studying it in depth.
EVMs have undergone frequent updation. The latest innovation is the addition of a voter verifiable paper  audit  trail (VVPAT). VVPAT allows voters to  verify  that  their  vote  was  cast  correctly,  and  to  provide  a means to audit  the stored  electronic  results. Now we have the most transparent and credible voting system in the world.

Four hallmarks characterize the way in which  the ECI handles the mammoth task: independence, transparency, neutrality and professionalism.That  ensures full public  trust in the Commission.

A distinctive new feature of the last general election was the significant role played by the New Media, including mobile telephony and social media, in any election for the first time. Some went so far as to call social media the new election ‘battleground’ and GE 2014 the first social media election.

One of the secrets of the success of the Election Commission of India is its openness to new ideas and to learning from its mistakes and achievements. We, therefore, expect that every election is better than the previous best. EC’s  efforts in pursuit of excellence  must go on. Not just India but the world has a great stake in the success of democracy in the region.

Realizing that  that the  aspiring democracies around the world look forward to sharing the knowledge, skills and expertise at ECI’s disposal, the Commission set up the India International Institute of Democracy and Election Management (IIDEM), as a training and resource centre in elections and democratic processes for both national and international participants. In just three years of its existence, the institute has imparted training to election managers of over fifty Afro Asian and Commonwealth countries, besides thousands of domestic master trainers.  The Institute has now become a training hub for assisting representative democracy worldwide.

A stage has come in India when holding a free and fair election is taken for granted. In fact not holding one would be news. We must not let that happen. This is India’s promise to its own people and to the world.