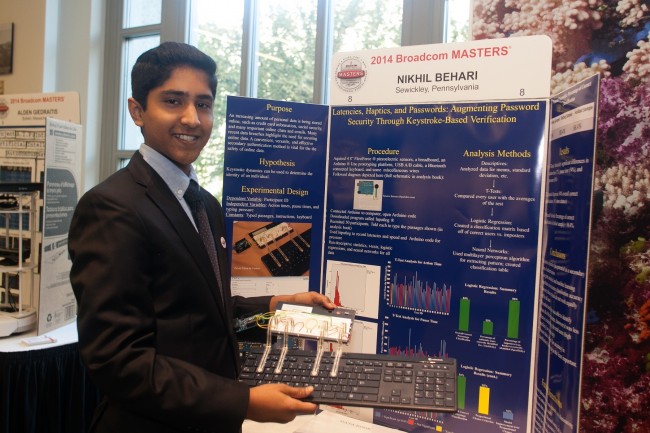 Washington, March 24 (IANS) President Barack Obama praised the work of young Indian-Americans as he exhorted budding American scientists to “keep exploring…keep dreaming” and use the power of their ideas to change the world.

“Keep asking why. Don’t settle for what you already know,” he said as he welcomed young scientists and engineers from across the country to showcase their inventions, robots, and discoveries at the 2015 White House Science Fair Monday.

“Never stop believing in the power of your ideas, your imagination, your hard work to change the world,” said Obama after personally viewing 12 of the exhibits by more than 100 students from 30 states.

“So Nikhil Behari is here from Pennsylvania,” he said calling out the winner of a second place award in Technology at the 2014 Broadcom MASTERS national finals.

“He’s a freshman — right? — in high school, interested in how we can better protect ourselves against hackers and data thieves online. So scientists are already using biometrics to prove that each of us walk in our own distinct ways.

“And Nikhil wondered, what if we each type in a distinct ways? So he collected all kinds of data about how a person types — their speed, how often they pause, how much pressure they use; built a special keyboard to test it.

“And he proved that his hypothesis was correct — that even if somebody knows your password, they don’t necessarily punch it in exactly the way you do.

“And he asked why — and made discoveries that now could help keep our online accounts more secure.

“It will be Nikhil. Congratulations,” he added amid applause.

Ruchi Pandya, 18, from San Jose, California, he noted “found a way to use a single drop of blood to test a person’s heart function, much like a person with diabetes tests their blood sugar.”

And “Anvita Gupta — where’s Anvita? There she is,” Obama said amid applause, “used artificial intelligence and biochemistry to identify potential treatments for cancer, tuberculosis, Ebola.”

“What she’s done is she’s developed an algorithm that could potentially significantly speed up the process of finding drugs that might work against these diseases,” he said.

“But Anvita’s algorithm has the potential of speeding up pathways to discovering what drugs would work on what diseases, and is consistent with some of the work that we announced around precision medicine that we are funding at a significant pace here at the White House,” he said.

Obama pointed out that “like several of the young people here, Anvita and Ruchi are first-generation Americans.”

“Their parents came here, in part, so their kids could develop their talents and make a difference in the world. And we’re really glad they did,” he said.

Earlier checking out the inventions in the State Dining Room, the Red Room and the Blue Room, Obama walked around to each table, chatted with the young inventors about their inventions, and posed for photos.

When Anvita Gupta, 17, of Scottsdale, Arizona, explained how she had used an algorithm to help identify possible new drugs to treat Ebola,
cancer and tuberculosis, Obama turned to the reporters, grinned and said, “I don’t know what you all have been doing. But this is what she has been doing.”

As part of the Fair, Obama announced over $240 million in new private-sector commitments to inspire and prepare more girls and boys – especially those from underrepresented groups – to excel in the STEM fields.

With the commitments made Monday, Obama’s “Educate to Innovate” campaign has resulted in over $1 billion in financial and in-kind support for STEM programmes.