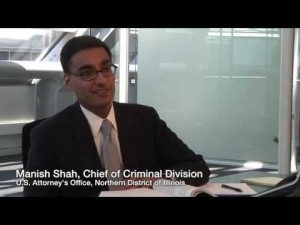 Washington, Sep 20 (IANS) President Barack Obama has nominated yet another Indian American, Manish S Shah, to the key post of US District Court judge for the Northern District of his home state of Illinois.

Announcing Shah’s nomination along with seven other judiciary posts, Obama said in a White House statement: “These men and women have had distinguished legal careers and I am honoured to ask them to continue their work as judges on the federal bench.”

“They will serve the American people with integrity and an unwavering commitment to justice,” he added.

An Assistant US Attorney in the Northern District of Illinois since 2001, New York-born Shah, 40, currently serves as Chief of the Criminal Division, having previously served as Chief of Criminal Appeals from 2011 to 2012.

Both the senators from Illinois, Democrat Dick Durbin and Republican Mark Kirk, welcomed Shah’s nomination reflecting the bipartisan support he enjoys in the Congress.

“Manish Shah has served with distinction as an Assistant US Attorney, and he will bring a wealth of knowledge and legal acumen to the federal bench in Northern Illinois,” said Durbin.

“Manish Shah’s stellar record in working with former US Attorney Patrick Fitzgerald makes him an outstanding candidate to be the next federal district court judge for Northern Illinois,” Kirk said.