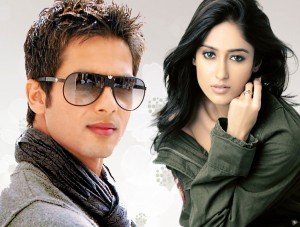 Let’s get one thing straight. This isn’t what you want to see a super-gifted filmmaker like Rajkumar Santoshi do when he gets together with a talented star-actor like Shahid Kapoor.

But what to do? Everyone wants a good laugh! It makes us forget about the troubles outside. Never mind the trouble that humour seems to encounter on screen each time someone makes a comedy.

To his credit, Santoshi deftly delivers the dynamics of drollery. No two ways about it. Unlike last week’s lewd laughter in “Grand Masti”, “Phata Poster Nikla Hero” (PPNH) avoids vulgarity like the plague.

Dirty word plague….sorry wordplay is firmly eschewed. What we get is an earthy robust over-accentuated tribute to Salman Khan’s Chulbul Pandey act from “Dabangg”, with Shahid Kapoor stepping into the khaki uniform with the same wonky elan as our dear Chulbul Khan.

Shahid has confessed it is easy to play a Salman Khan fan. The young actor who has so far not revealed his comic chops and has in fact shown dramatic synergy to be his forte, pulls out all stops to play an imposter cop, a role that makes him a Chulbul Pandey twice-over because Salman’s cop-act was underlined as a spoof in the first place.

Does that make sense? Even if it doesn’t, it’s just fine. Don’t sweat over it. This is not one of Santoshi’s seriously-intended films. For that, please refer to this wonderful director’s “Lajja” or “Halla Bol”. And if you are looking for hardcore gut-spilling action, go to Santoshi’s Deol-driven juggernauts “Ghayal” and “Ghatak”.

Come to think of it, PPNH is not even an all-out zany comedy of errors like Santoshi’s ‘Andaz Apna Apna’. So what is it? After painful pondering over the over-punctuated parodic material in PPNH, I’d say it’s a mongrelized mirth machine. A sort of “Dabangg” mated with Santoshi’s last very successful comedy “Ajab Prem Ki Ghazab Kahani” which evidently taught Santoshi a lesson: farcical frivolity and lengthy titles translate into big bucks.

“Phata Poster…” gives poster-boy Shahid Kapoor a custom-built opportunity to get seriously comic. He digs deep into the very slim plot, ferreting out meager meat from the skimpy material. I must think that Shahid has a ball doing the droll act for the doll Ileana d’Cruz who abandons her serious sari-clad audacious wife’s role in “Barfi!” to play the kind of “social worker” who brings a bad name to all charity work.

Didn’t Katrina play a similar busybee’s role in Santoshi’s “Ajab Prem…”? Didn’t Ranbir do the goofy Chaplin-meets-Kondke act for the commodious camera in that film? Shahid seems comfortable doing the irrepressible comic impresario. But he’s far more at home in the more sensible sober scenes he shares with his screen-mom Padmini Kolhapure, who looks too young to play Shahid’s mom. But then at least her talent is being aired.

Come to think of it – everyone in this over-the-top comedy seems to be in it for the sake of getting into a massy mode. The art direction is kitschy. The camera wallows in the carnival mood. In the endeavour to enroll enthusiasm into the rom-com, the film succeeds. But be warned: the writing is repetitive. The scenes all end in exclamation marks and italics… like an essay by a schoolboy who is out to impress his favourite teacher. The humour jumps out of the screen like an eager 5-year old brat which must get your attention at any cost.

If you think Shahid is one of the more interesting star-actor’s of the current generation, then PPNH is a frenetically fashioned farce fest with excessive energy oozing out of every saturated pore. Shahid’s songs and dances, especially the zanily unpredictable “Agal bagal” number are the highlight of the humour-hamper. And that’s not such a good thing. Shahid gets to share camera space with some accomplished actors like Saurabh Shukla, Mukesh Tiwari, Darshan Jariwala and Sanjay Mishra. And that’s a good thing.

At least we are ensured that the slender pretext for laughter is bolstered by hefty actors.

Oh yes, and the real Salman Khan shows up.

Congratulations to our Baby of the Week, Ayaan Mittal!

Dil Bekaraar: A charming rom-com that will make you nostalgic