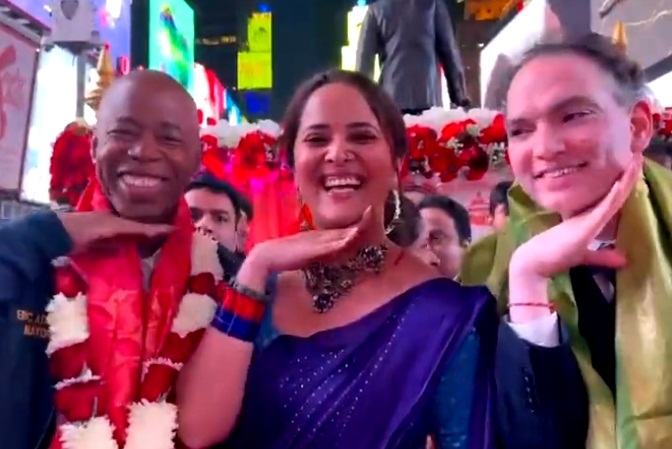 Los Angeles, Oct 12 (IANS) The entire world has been bitten by the ‘Pushpa: The Rise’ bug as now New York City’s mayor performed actor’s iconic hand gesture from the film.

New York’s Mayor Eric Adams was seen doing the hand gesture during an event organised by the Telugu community in the city where he interacted with the people and also celebrated the festival of Batukamma with them.

A clip shared by a fan account on Twitter, Mayor was seen performing the iconic hand gesture with two more guests.

The fan account wrote, “Thank you @NYCMayor for Showing Your Love towards Our Indian Film #Pushpa ai, ! Special Thanks and Congratulations to our @anusuyakhasba gaaru and #mangli for making the event grand Successful Video By : @NYCMayorsOffice @alluarjun ac #Anasuya ac #AlluArjun @PushpaMovie”

Allu Arjun’s ‘Pushpa: The Rise’ became a phenomenon upon its release. The film also stars Rashmika Mandanna and Faahad Faasil. The second installment has gone on floors.