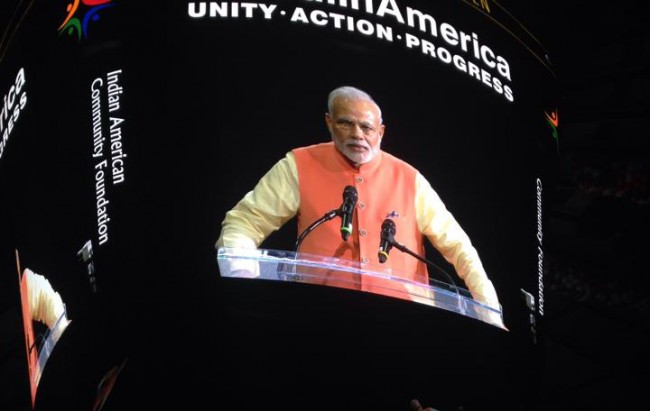 Indian Prime Minister Narendra Modi is currently on an official visit to Australia and Fiji. In Sydney, he attended a public reception that was attended by approximately 20,000 people of Indian origin. A special chartered train-named Modi express- carrying 220 people was flagged off by Matthew Guy  – the multi-cultural minister of Victoria province from Melbourne to Sydney to participate in the gala event. Australia is home to 4.5 lakh people of Indian origin. Similarly, when Modi visited USA in September of this year, he was given a grand public reception at Madison Square Garden inNew York that was attended by more than 20,000 people of Indian origin. These public receptions are akin to political rallies that a visiting Indian head chose to address on foreign lands. The tone and tenor of speeches on both occasions were clearly political rather than a substantial commentary on policy matter.

The feasibility of such rallies has become a reality because there is a huge Indian population overseas. There is a 25 million strong Indian diaspora spread across the world.

But what makes Indians living abroad to be a part of political process in India? The people of Indian heritage living across the world have a mix of characteristics: some are foreign citizens, while others are Indian citizens (NRIs). Some have nominal relationship with India, their ancestors having left Indian shores generations back, while others belong to the pool of a mobile population having active stay and ties in India. Majority of NRIs living abroad find new roots in adopted lands, raise families, work and pay taxes and enjoy the facilities and privileges  as much as locals do. But there is something that makes them yearn for India! They may continue to live offshore, yet their heart lies in India. In other words, you cannot take India out of their hearts. Aligning with a charitable work is one of the common things NRIs do to give back toIndia. Increasingly, political participation has also become a tool for many to contribute to their motherland even while sitting afar.

Over the years, the political parties ofIndiahave also reached out to the Indians settled abroad. This has culminated in Indian parties having their foreign extensions. Overseas Friends of BJP (OFBJP) is the most obvious case in point. Its ideological mentor Rastriya Swayamsevak Sangh (RSS) also has overseas presence. The global front- rechristened as Hindu Swayamsevak Sangh (HSS) – has presence in several countries. HSS provides a platform for cultural nourishment to the Indians (Hindus) far away from their land and also conduct ‘sakhsas’.  The current year marks 25 years of existence of HSS inUSA. Similarly, OFBJP has chapters in more than 15 countries, with most active presence in USA,UK and Canada. Behind successful organization of political rallies for BJP’s Narendra Modi were the combined efforts of HSS and OFBJP. The significance of overseas chapters can be gazed from the fact that BJP has in place a full time global convener whose job is to actively work on the overseas chapters. The office bearers of the foreign units maintain active ties with their parent organization in India and channelize the visits of leaders and dignitaries, in addition to performing the important task of fund raising.

Similarly, Indian National Congress too has spread its wings out ofIndiain the form of Overseas Indian Congress (OIC).

But the most amazing story of an Indian political movement galvanizing the Indian diaspora across the world is exemplified by none other than the nascent political party called Aam Aadmi Party (AAP).Indiaagainst Corruption (IAC) heralded by Anna Hazare and Arvind Kejriwal reached a crescendo with support from Indians living abroad. The desire for Indians across the globe to get rid of corruption inIndiafound an expression in IAC. Corruption inIndiais as pervasive as vapors in the mist! When IAC movement started dwindling and Kejriwal decided to launch a political party, nonresident Indians (NRIs) were the first to rally behind him. The author has the firsthand experience of how even without opening formal chapters, AAP found such a massive spontaneous response from the NRIs. In the year 2013, AAP went into a sustained campaigning mode for over 10 months in a bid to unseat the Sheila Dixit –led Congress government. NRIs played a crucial role in its campaigning right from the beginning. Albeit unstructured, the outpouring of support by NRIs was seen to be believed! AAP’s clarion call for a public -funded election found resonance with Indians living abroad. The concept of online donations -and that too in an open transparent way- titillated overseas volunteers. That is probably the reason why NRIs have continued to fund the Aam Aadmi Party till date.  AAP has consistently received 25 % of its overall donations from NRI community.  In addition, during 2013Delhiassembly elections, NRIs descended uponDelhito campaign for the party. NRI volunteers played a crucial role in providing back -end IT support. Phone calling campaign was another classical example that gave maximum dividends to the party. Think of the impact of a call from an NRI to aDelhivoter to support the anti-corruption plank of AAP. It gave glamorous dimensions to the whole campaigning!

With increasing political participation of NRIs inIndia, the demand for dual nationality has also gained traction. Indian constitution does not allow dual citizenship. If an NRI acquires citizenship of a foreign country, then she has to surrender her Indian passport. However, there are close to 40 countries that allow dual citizenships. Most prominent examples includeUSA,UK,CanadaandAustralia. People of Indian origin settled abroad have been claiming that due to their emotional and financial investment inIndia, they should also be allowed to hold Indian citizenship so as to claim political rights. There is a merit in this argument and in my personal opinion; Indian government would do well to grant this wish! After all, as a famous musician Pablo Casals said: “The love of one’s country is a splendid thing. But why should love stop at the border?” Therefore, it is high time that Mother India treats her two sons at par, even if separated by geography!

*The author is a Chicago-based medical doctor (Neonatologist) and a socio-political commentator. Twitter:@drmunishraizada