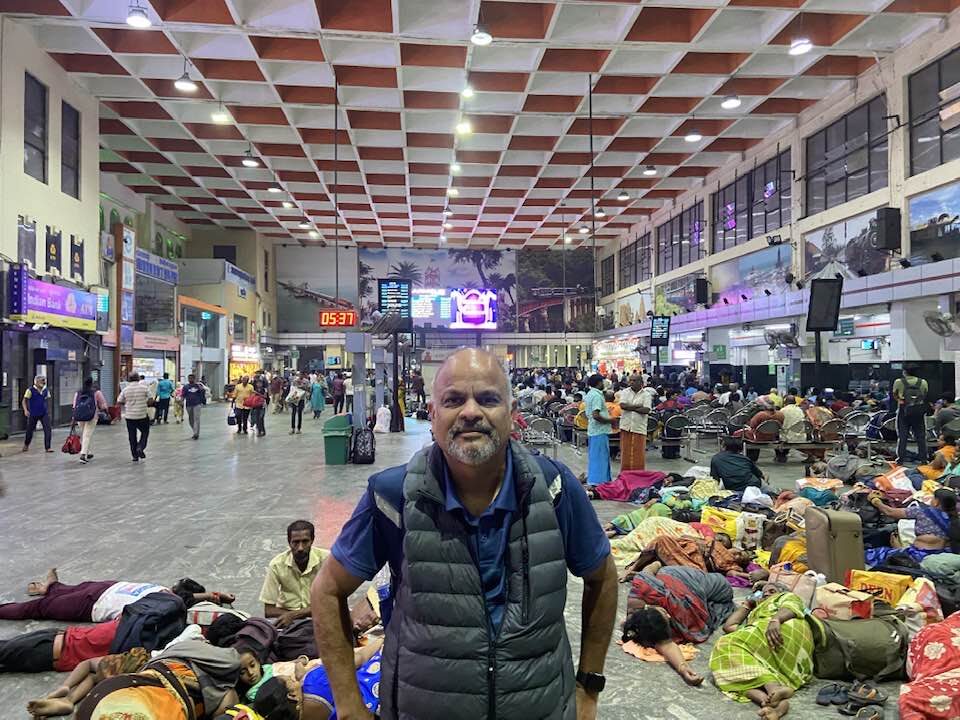 My trip to India was on short notice, which obviously had an impact on my ticket fare. Within the little time I had, I researched a few combinations and figured out a one-way ticket on separate airlines, which offered the best price while also giving me the option of using the travel bank credit that one of the airlines had given me during a COVID-19 trip cancellation.

So, I flew out on Etihad to Kochi and into Atlanta by Delta/it’s partner airlines from Chennai.

I had two options to go to Chennai for catching the flight from Kochi, Calicut or Coimbatore (all airports are within 2 to 4 hours driving distance). The second option was to catch a train to Chennai from Pattambi railway station which is 6 kms away from my home. My nephews who live in Chennai guided me and bought a ticket for the Mangalore- Chennai Mail (the same old Madras Mail).

My nephew took it upon himself to buy a ticket in Tatkal, the only way you can get a train reservation as all trains were fully booked under the normal reservation. My nephew claims to have mastered the art of 99% success rate booking Tatkal reservations. As claimed, he did and my journey by rail was finalized.

I was undertaking a train journey in India after 23 years, therefore the image of the train compartments and the preparation for the journey in my mind was the same as was in the late nineties. I have missed the Nitish-Mamata-Laloo and now Modi improvements in the train travel experience. I have heard a lot about passenger convenience, safety, cleanliness and punctuality of schedule.

I was excited about the journey. As the big day came closer, my inner consciousness retrieved incidents of past journeys and started asking me, “Are you prepared for this or that”. Is your luggage safe. You are traveling alone. What if you have to pee during the 10 hour and 30 minutes travel with the Chennai Mail stopping at almost all stations en-route. The items my wife asked me to bring and in the carry-on luggage multiplied my anxiety.

I expressed my concern to my nephew, who found a solution in a steel chain to bind my luggage to the seat.

Now that I got the security taken care of, I was all set to board the train. I was kind of reliving my 1976 travel as a teenager seeking employment in Prayagraj (then Allahabad). The train is the same except the train number (Indian railways prefixed 4 additional digits to the train number to facilitate computerization. The station except that Pattambi station has got two platforms since then and the train came on platform #2. The other difference was that then I traveled 3 tier sleeper, this time it was a 2 Tier AC.

Indian Railways has indeed made trains more traveler friendly. Most information, like coach position, train running etc. can be viewed on your mobile by just typing the train number and the info you are looking for. Chennai Mail stops only 2 minutes in Pattambi. Assisted by my son-in-law, I boarded the train coach at position 5 as was instructed but realized my coach was in fact the next one. I navigated myself through the coach inter connection to the right compartment and located my berth. There were no inter connection of compartments during my first journey and if you boarded a wrong compartment back then, the only option was to get down at the next stop and change the compartment. In those situations, you always had the risk of being marked no show and the TTE allocating your berth to another waitlisted passenger.

Having located my berth, my next mission was to secure my luggage. I tried to push my suitcases under the side berth allotted to me, but my international luggage was too big to go under. I placed the luggage under the seats in the aisle as those passengers had not boarded yet.

The bathrooms in the train were relatively clean. They were Indian-style seats, not painted yellow as they used to be in the past. There was a stainless-steel mug to collect water from the pipe to clean after you are done. The mug wasn’t chained to the water pipe which was the practice in the past to protect it from stealing (listen to standup comedian Mr. Grover on a chained mug in train compartment bathrooms. He is hilarious). Thanks to my sister, the steel chain allowed me to sleep securely and enjoy the AC berth.

Train punctuality wasn’t just an advertisement of the government but proved real. The train arrived on schedule in the Puratchi Thalaivar Dr M G Ramachandran Central Railway Station which used to be called as the Madras Central Station in the past. Both my nephews were on the platform to receive me, so I had no difficulty in taking out my luggage and did not engage a coolie. If you want to know more about coolie, watch Amitabh Bachan’s blockbuster Bollywood Hindi movie named “coolie” for a highly dramatized version of what a coolie is.

As we walked out of the Chennai station, I could see major changes in terms of passenger amenities, eating places, lodgings, huge digital display boards etc.

We had coffee at the station. Coffee in Chennai still has its unique taste. However, you can still see waiting passengers sleeping on the floor in large numbers. As we walked through the platform, a weird smell greeted us. My nephew had already warned me about it, but I wasn’t aware it would be so much unbearable. They were masked, I wasn’t. I asked if this was the foul smell from the Cooum River. The river is highly polluted in the urban area (Chennai).and whoever landed in Chennai by train will not forget the foul smell that used to greet them upon exiting the station.  My nephew told me that Cooum river is largely clean now, thanks to the efforts of the state Government and to Modi’s Swatch Bharat Abhiyan. This new smell emanates from the dry fish being transported from this station from and to various other destinations. Curious, I enquired why the fish shouldn’t be transported from another location for goods only so the passengers can be kept free from its odors. I was told the railway authorities made alternate arrangements for the fish to be shipped from another location, but the authorities had to bring it back under pressure from the traders, and other stakeholders. Chennai wants its visitors to experience it the age-old way to make their visit unforgettable.

Long story short, I enjoyed the train journey after over two decades. My only suggestion to the Indian Railways is to make the ticket reservations less stressful and predictable. Increasing seats commensurate with the demand is the simple thing to alleviate this problem. The other suggestion is to listen to the complaints of Southern Railways. The coaches allocated to Southern Railways are always old, rusted, and no amount of paint will hide its age. Also, if possible, allocate lower berth to seniors. It is hard to climb to the upper berth for most age sixty plus passengers.

In the end, thank you Indian Railways for operating the world’s largest rail network. What you guys do is amazing.

We moved to the parking lot. My nephew said, be careful when opening the door. He drove the car a few meters before letting us in. It was the wee hours, I feared that there could be carjackers who may pounce on us. My fear was genuine. There were a gang who entered the car before we could get in. A huge gang of mosquitoes, that is! At the parking checkout, I heard my nephew negotiating the parking fee. Perhaps, the parking rate varies depending upon how many mosquitoes entered the car and accompanies the passengers. My nephew drove the car and throughout he was clapping his hands. I was under the impression that he is so excited that mama (maternal uncle) is visiting him after several years.  Soon I realized that the clapping was not for me; he was killing the mosquitoes that had entered his car!