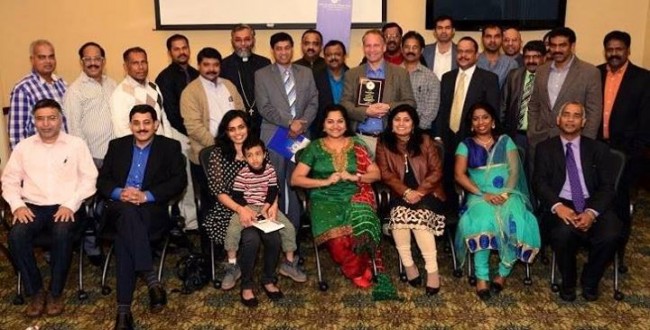 East Rutherford,New Jersey:  The Indo-American Press Club (IAPC) was officially inaugurated at the Homewood Suites of Hilton, East Rutherford, New Jersey on Saturday, November 15th, 2014 with the lighting of the traditional lamp by Suneel Hali, Founder and Publisher of Cinemaya Media, Inc., Lalit K. Jha, Chief US Correspondent of Press  Trust of India (PTI), sponsors, community and corporate leaders and the members of the IAPC Executive Committee, National Directors, and the Board of Trustees.

Attended by nearly 200 media persons, corporate and community leaders and sponsors, the elegantly organized event marked the historic beginning of the Indo-American Press Club, that has been formed with the objective of being the voice of those who are working in the media world and strive to be the conscience of the larger society. 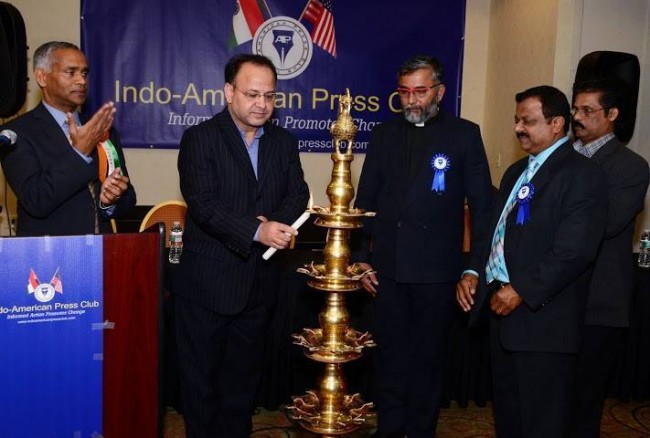 In his inspiring inaugural address, Suneel Hali emphasized the key role being played by the media, which drew him to give up his well-paying corporate job by listening to his inner voice and start Cinemaya Media, which encompasses visual, print, audio, and electronic media. “Journalists are extraordinary people dedicating their lives to an extraordinary mission to serve the humanity, and to be the conscience of the society,” Hali reminded the audience.

Stressing the importance of the media and the role the Indo-American Press Club is expected to play, Lalit Jha, in his keynote address said, “We are the watchdog of the society. Whenever there is an issue – we are the first one to report about it – be it a visa issue, or some road accident, or innovation or matter of pride of our society. Yes, we are the voice for the community – there is no doubt about it. But who can be our voice – help us when we are in need, ensure that we maintain the highest standard of journalist, but also make sure the basic rights and dignity of Indian American journalists are maintained and act as a mentor to upcoming and new journalists. It is here, I think, the formation of Indo American Press Club could play an important role.” 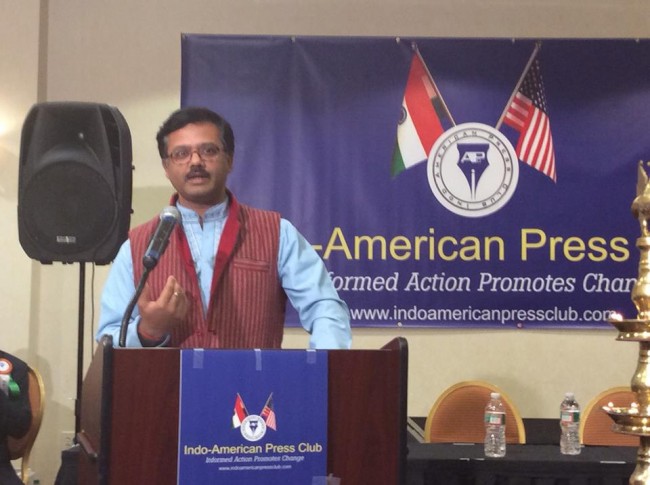 In his presidential address, Ajay Ghosh, President of the Indo-American Press Club, described the reasons and objectives for forming IAPC.  “After many months of planning and strategizing, IAPC was formed with the lofty ideal of providing a common platform to journalists of Indian origin living in theUnited States, while fostering closer bonds and cooperation among an extensive network of journalists across the nation.”

Ghosh lauded the coming together of IAPC members, who are “very rich with talents, skills, and experiences in the vast media world and are committed to giving back to the society. The formation of IAPC is an expression of their commitment to enhancing the working conditions for journalists, exchanging of ideas, offering educational opportunities to our members and to aspiring journalists around the globe.”

Reflecting on the many individuals behind and the process of forming IAPC, Ginsmon Zacharia, Chairman of the Board of Trustees, said in his address, that the Indo-American Press Club has been formed with the objective of enhancing the standard and working conditions for journalists, while striving to work towards greater co-operation among journalists working across the nation, and thus be the voice of the community of journalists. “While striving to have greater coordination and networking among journalists, our motto is to “be the voice of the community of Indian American journalists,” he said. 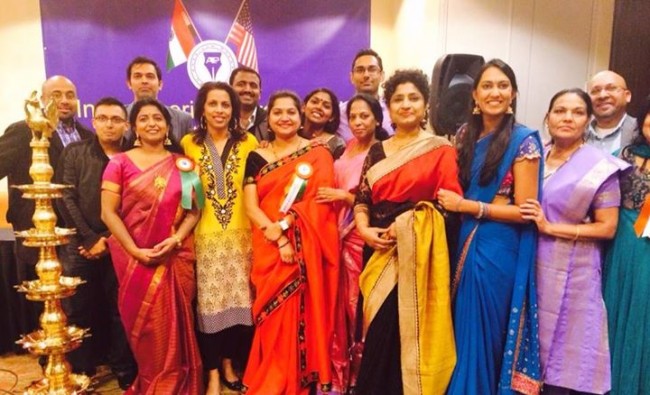 In his address, Fr Johnson Punchakonam, Executive Vice President of IAPC allured to reasons for the formation of IAPC. “By coming under the umbrella of The Indo-American Press Club and standing united, we are committed to offer a common platform, raising our voice together in our efforts to shape the world that is fair, just and equitable for the all today and for the future generations.”

In her welcome address, Vineetha Nair, Executive Secretary of IAPC, who has been coordinating the weekly teleconferences leading up the inaugural event, said, “The Indo American Press Club is a forum by and for media professionals and freelancers, working, or associating with print, broadcast and online media outlets inNorth America. We lacked an effective platform to associate and network, to share our success, our concerns, our challenges, a platform that would give us a unique sense of belonging and continuity. IAPC was formed out of this need.”

Earlier, the day began with an introductory session led by Jilly Samuel, Vice President of IAPC. During the General Body Meeting, IAPC delegates charted out the path they wanted IAPC to take in the next one year. During the seminar that followed, Easo Jacob, a National Director of IAPC fromTexas, enlightened the delegates, with his presentation of the numerous Risk Factors and Precautions Journalists need to be aware of while carrying out media related works by individuals and corporations in the media world.

During the hands on workshop on “The Art of Photo Documentary” Daryl Hawk, a world-renowned photo-journalist and author, discussed with an enthusiastic audience about his style, philosophy, and various techniques he uses as a professional when photographing subject matter. Equipment, lighting on location, environmental portraits, and travel tips for photographers  were other aspects that were covered. “This presentation was particularly valuable to all of us in the media world who wanted to learn the techniques and skills in photography, Rajasree Pinto, Coordinator of the Workshop on Photography, said.

Suma Nair, a popular singer from the GardenState, entertained the audience with her melodious voice singing popular numbers in both Hindi and Malayalam. The vote of thanks was proposed by Rajasree Pinto, the Treasurer of IAPC.  The inaugural ceremony solemnly concluded with a sumptuous dinner.  For more details about IAPC, please visit:  www.indoamericanpressclub.com