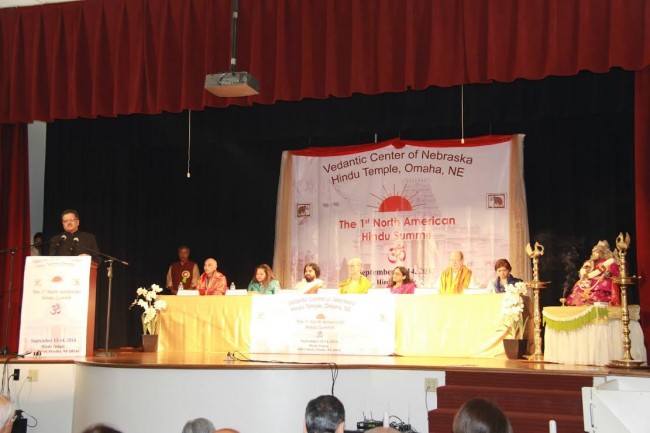 Atlanta, GA: The 1st North American Hindu Summit brought together Hindu leaders and organizations to deliberate on the future of Hinduism in North America. The purpose of the summit was to bring these various leaders of American Hindus on a common platform to deliberate on this vital topic and develop some consensus on action items that can then be acted upon in a deliberate and coordinated manner. The organizers felt that this was an important first step in bringing together various constituencies to develop and coordinate their efforts in promoting the cause of Hinduism in North America.

Over 300 delegates attended the summit. The summit was also streamed live across the World.

The summit was preceded by a night of Hindu cultural program, which included a session where the Hindu Youth asked questions about Hinduism and these were answered by the distinguished speakers. 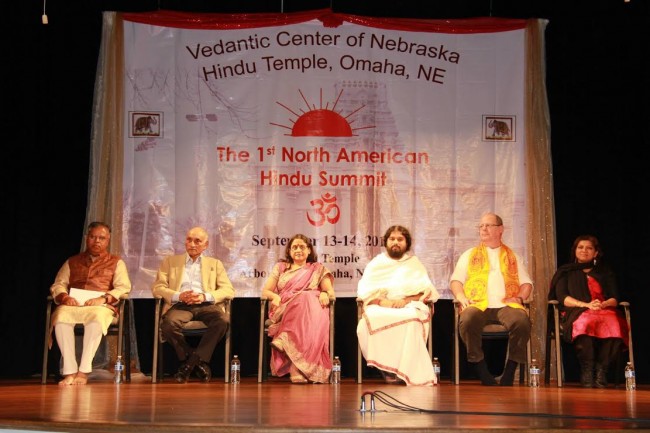 The summit started promptly at 9am on Sunday September 14th. During the inauguration,the President of the Vedantic Center of Nebraska, Dr Tej Adidam welcomed the speakers and delegates, while Dr Sanjay Pratap Singh, the Chief Convener of the Summit explained the purpose of the Summit.

The erudite speakers briefly shared their thoughts on various topics as below:

-“Future of Hinduism in North America – The Art of Living Perspective” – Swami Pragyapad – Swamiji spoke about Dharma, its meaning & its needs.

Ms.Bansal spoke about the needs of Hindus like her & about her own personal spiritual journey.

“Future of Hinduism in North America – Challenges of thriving in the midst of multiple faiths” – Swami Atmavidyananda . Swami ji spoke about how to live in peace and thrive in a continent with multiple faiths, & about educating our youth.

Future of Hinduism in North America – Role of Women and Role of Seva. – Anju Bhargava.

Ms.Bhargava spoke about how Seva can transform our Youth and inspire them. She also clarified that there were no restrictions on women in religious practices in Hinduism. She also narrated her personal journey of becoming a priest.

Past, Present & Future of Hinduism in North America – Stephen Knapp

Shri Knapp  spoke about his 8-point agenda for Hinduism, which included training and teaching of our youth.

Padma ji spoke about the work of Hindu America Foundation and the importance of advocacy in today’s world.

Dhirendra ji spoke passionately about the need to safeguard the Hindu culture and Identity. He also spoke about his personal journey of trying to fight against the untruths being spread about Hinduism.

This was followed by a panel discussion on the “Future of Hinduism in North America” The panelists were the distinguished speakers and the moderator was Dr Sanjay Pratap Singh, the Chief Convener of the Summit. Numerous issues were discussed during this panel discussion, including what Hindu institutions will need to be created in North America, what are the needs of the second and third generation Hindus, etc. A major topic of discussion was whether a religion could survive in a continent where it does not have its own Centers of Learning. It will need to produce its own priests and Acharyas here in North America, as it unlikely that the second and third generation Hindus would go to India to find the pujaris and Acharyas for the over 400 Temples in North America.

During the concluding part of the Summit, the panelists answered the questions of the delegates/audience. This lasted over an hour and many important issues were deliberated upon during this session.