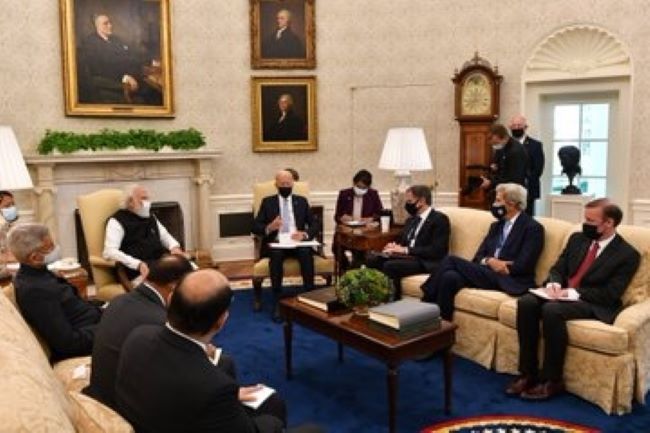 New York, Sep 25 (IANS) Indian Prime Minister Narendra Modi has set forth a policy of “5Ts” — Tradition, Technology, Trade, Trusteeship, Talent — during his meeting with US President Joe Biden for a decade of transformational partnership between New Delhi and Washington, according to Foreign Secretary Harsh Vardhan Shringla.

Briefing reporters after the Modi-Biden meeting in Washington on Friday, Shringla said: “The ‘5Ts’ in consensus summarise our relationship. In the Prime Minister’s view, India and the US are natural partners and endeavours to consolidate and strengthen our partnership of trust.”

Tradition stands for democratic traditions and values the two countries share, he explained.

Technology, the most important driving force in the world, has a particular role in US-India relationship.

Given the strong complementarities between Indian and US markets, increasing bilateral trade was a priority.

Trusteeship is the concept to deal with emerging global challenges of climate change, and as the concept is understood in India, the planet is held in trust for future generations.

Talent signifies the people to people link between the “two countries, which is manifested by the contributions made by the Indian American community”.