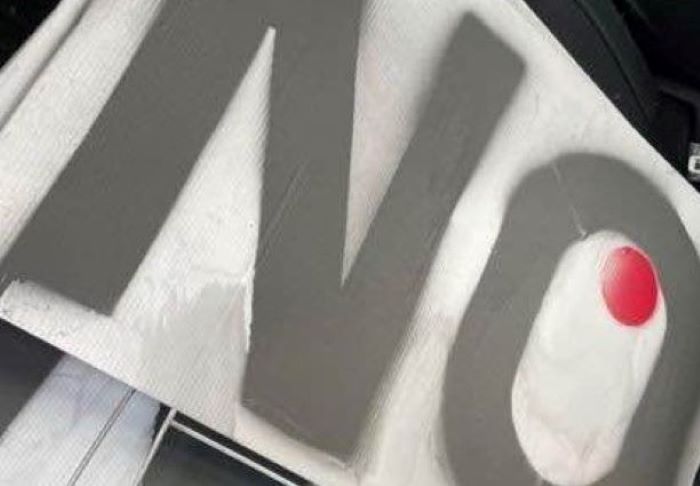 Image of a No Dot sign circulated on social media.

Atlanta, GA, September 16, 2021: Racist ‘No Dot’ signs that cropped up on Kelly Mill Road and Bethelview Road in Forsyth County earlier this week have brought back memories of the Dotbusters hate group that was responsible for several assaults on Indians in New Jersey in the 1975 to 1993 period.

The signs were first reported on the Kelly Mill Coalition’s Facebook page. Screenshots of the posts and signs soon started circulating on social media groups, alarming community members. A member of the Facebook group denounced the act as “UnAmerican” while another said she had accompanied the Forsyth police to pull out some of the signs.

This Facebook group, however, was set up by neighbors who are opposed to the construction of the Sri Bhadradri Rama Temple of USA and priests’ residence in the Kelly Mill area. The group has over 700 members.

The proposal called for homes for the Sri Ram Gardens neighborhood to be built on both sides of Kelly Mill.

During the meeting, residents shared several concerns, including worries about how much traffic and noise would be generated by the development, impacts on local schools, whether the design of the project would be allowed under county rules, how the developments might impact property values and concerns about large gatherings.

However, it seems like the plans for the Hindu temple are being dropped in favor of a residential neighborhood. At a public participation meeting held on September 13, Ethan Underwood, a zoning attorney representing the development, said if the residential zoning gets approved, his client would withdraw plans for the temple.

“I think as a community we need to be aware of the barriers that often come up when our communities want to create community centers or non-Christian faith institutions. I wonder if zoning laws and redistricting laws are subtle ways in which racism and xenophobia play out,” said Aparna Bhattacharyya, Executive Director of Raksha.

“In the wake of the 9/11’s 20th anniversary and the backlash on South Asian communities for years that followed, the recent antisemitic graffiti at Pope High School, and the Anti-Asian hate in our communities, I am saddened to hear about the signs posted around Forsyth County directed towards our communities,” she added.

Rajeev Menon, Vice President of CoHNA (Coalition of Hindus of North America) and President of Federation of Indian Associations of Georgia (FIA), strongly denounced “this act of bigotry and Hinduphobia which is becoming rampant in the country”.

“I urge Hindu Americans to report such incidents to law enforcement for appropriate actions. Even though many such incidents happen daily, across the nation, most of them are not reported because of the fear of repercussions,” he said.

Menon said his organizations have been working with state politicians to pacify the community after the signs came up. He released a statement on behalf of the Forsyth County Georgia State Delegation.

Rajeev Menon, Vice President of COHNA (Coalition of Hindus of North America) and President of Federation of Indian Associations of Georgia (FIA) said his organizations have been working with state politicians to pacify the community after the signs came up. He released a statement on behalf of the Forsyth County Georgia State Delegation.

“Freedom of religion is a founding principle that defines our country. The ability to exercise your faith with no impediment resonates as one of the key rights that our government works daily to preserve and protect. In Forsyth County, Georgia, we have seen a vast influx of diversity in nationality, religion and background. Our county benefits each day by embracing each member of our 250,000+ resident community,” the statement reads.

“This past weekend though, we witnessed acts against our Hindu community. This is patently unacceptable. Our community thrives when each of the quarter of million residents are free to worship with no threat or fear of retribution.”

“Please pause tonight with your family and reflect on the importance of every neighbor and friend being able to exercise their Constitutional rights as they deem appropriate,” the statement added.

Republican Dr. Rich McCormick who ran for Congress last year, in his statement, also released through Menon, said the American Dream is being pursued by Indian immigrants who have done it the right way.

“They have followed the laws, paid their taxes, and been wildly successful without detracting from anyone.  Anti-Hindu bigotry should not be tolerated any more than any other hatred.  It is evil and should be opposed everywhere it is identified,” he said.

State Rep. Sharon Cooper added her voice to the concern against the signs.

“America is made stronger when its people acknowledge and respect our differences, including our differences of religious beliefs,” she said in a statement issued through Menon. “Our country was founded on principles of religious freedom and represents an opportunity for people of all walks of life. People of different faiths and cultures add to the richness and fabric of our country and religious persecution must not be tolerated in our communities. Those of the Hindu faith are currently under attack and we must speak out loudly against such hatred and stand side by side to fight bigotry and hatred of all kinds, including differences of religious beliefs.”

They See Blue, Georgia, a group that mobilizes South Asian American voters to elect Democrats, condemned the act through a press statement. ” On or around September 12th in Forsyth County, bad actors placed anti-Hindu signs near the proposed location of a Hindu temple and residential community. They See Blue Georgia condemns this act of bigotry.”

A shaken community, however, hasn’t taken the signs or their deeper significance lightly.

“We are fearful for our lives, that of our children playing in playgrounds, swimming pools, basketball courts, and other public places,” said Shobha Swamy, Atlanta resident and General Secretary of CoHNA. “Any attempt to draw boundaries on Hinduism and what it represents is dangerous and encroaches on our civil rights.”