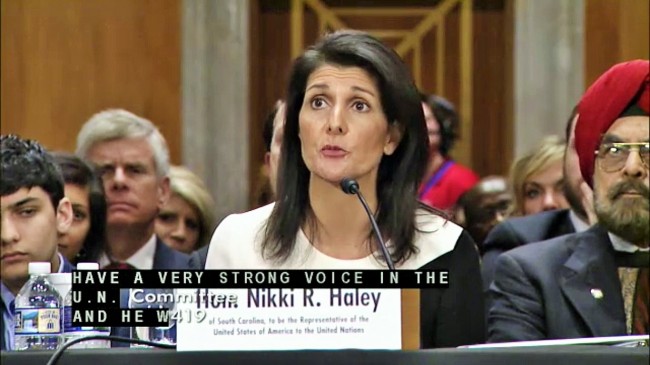 New York, March 30 (IANS) Nikki Haley, the US Permanent Representative to the UN, has claimed that her mother was not allowed to be a judge in India because she was a woman, while in fact women have been judges in the country since at least 1937.

Answering a question about the role of women at a meeting of the Council on Foreign Relations on Wednesday, she said, “When you didn’t have a lot of education in India, my mother actually was able to go to law school. And she was actually put up to be one of the first female judges in India, but because of the situation with women she wasn’t allowed to sit on the bench.”

“But how amazing for her to watch her daughter become governor of South Carolina and US ambassador to the UN,” she added.

Haley’s parents, Ajit Singh and Raj Kaur Randhwa, reportedly emigrated from India in the 1960s. But more than two decades earlier a woman, Anna Chandy, had become a judge in Travancore in pre-Independence India.

Chandy was promoted to District Judge in 1948, the year after Independence, and became a High Court judge in 1959. Chandy was able to sit on the bench and function as a judge all through — years before Haley’s parents left India.

UN Ambassador is a cabinet-level position in the US and Haley is the first Indian-American to reach that position. A Republican, she was the elected Governor of South Carolina state in 2010.

Haley said that she is “proud” to be the daughter Indian immigrants who believe the family is “blessed” to be American.

Prefacing her answer to a question about President Donald Trump’s attempts to temporarily restrict people from six Muslim-majority countries and refugees coming to the US, she said, “I am the proud daughter of Indian immigrants, who reminded my brothers, my sister and me every day how blessed we were to be in this country.”

“I do believe that the fabric of America is legal immigration. That is what makes the US so fantastic,” she said.

Haley’s father is an agricultural scientist and a professor, while her mother is a businesswoman.

Haley denied that Trump’s attempts to restrict people coming in from the six countries was based on religion and pointed out that several Muslim-majority countries were not covered by it.

“If that were the case, there are another dozen, you know, Muslim countries that could have been on the list.”

She said that nothing should be banned based on religion.

“We will never close our doors in the US. We won’t. But what we did do was take a pause.”

Because of the difficulty to properly vet people from those six countries and the refugees, Trump had wanted the temporary ban.

“This is not about not wanting people in,” she said adding that it was about keeping the terrorists out.

She noted that her husband, Michael Haley, a captain in the Army National Guard who served in Afghanistan, helped two Afghan interpreters and their families immigrate to the US.

The difference was that they could be properly vetted, but it was not possible in all refugees cases and the administration was stopping them till the problem could be resolved.

A US court has stayed Trumps orders temporarily banning people from six countries coming to the US.