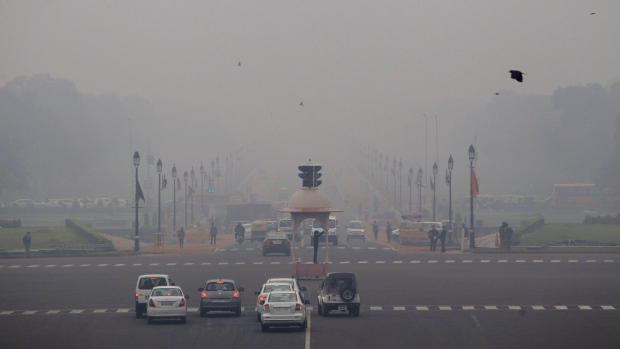 Just when the Narendra Modi government was celebrating its first year in office on a note of simulated well being, Gardiner Harris, bureau chief of New York Times in New Delhi, spoiled the party by making a gloomy announcement: New Delhi, the capital of Modi’s dream nation, was unlivable and that Harris was leaving, with his wife and children to the cleaner air of Washington.

We poor natives have been screaming the same alarm from rooftops without any apparent effect. But now that the New York Times has squealed, the Times of India reproduced the piece on page one. This was admission by India’s most powerful newspaper that its excellent campaign on pollution was not as effective and that it gained geometrically by leaning on the New York Times story.

During the three years that Harris was posted to South Asia, he was occasionally afflicted by pangs of conscience that “it was unethical for those who have a choice to willingly raise children here”.

Harris clearly was not blessed with another choice because he gives every indication of staying on against his will. His wife appears to have been torn between her wifely desire to be with her husband in troubled harness and to run away to Washington with her son. Harris quotes “nascent areas of research suggesting that pollution can lower children’s IQ, hurt their test scores and increase the risks of autism, epilepsy, diabetes and even adult-on-set diseases like multiple sclerosis”.

There is frightening description of his son, Bram, being injected steroids to fight acute breathlessness because of Delhi’s pollution.

In a state of panic, his wife left for Washington two years ago. Doctors reassured her that some medicines might help. So she returned to New Delhi “but she sobbed for hours on the return flight”.

Even though the Harris story is a simple one which should elicit all our sympathy, Indian responses are not so straight forward. There are attitudes and attitudes towards critical observation by a white foreigner.

In recent weeks, I have been accompanying my younger brother to various hill stations in search for reasonable property to enable him to escape Delhi’s unspeakable pollution. He is a big man and, on the face of it, healthy. But over the years, his tolerance level for Delhi’s increasing pollution has declined. In recent months, alarmingly so.

I have also seen relatives and friends carrying inhalers on their persons, sometimes furtively. It is not uncommon to have discussions veer around to Delhi’s record levels of air pollution. If a government official happens to be present, the point is made even more pungently: Delhi’s pollution levels are twice as high as Beijing’s. Adverse comparison with Pakistan would work like magic.

Apparently, levels of five particles in the air called PM 2.5, which cause maximum lung damage, are twice as high in Delhi as they are in Beijing. In Beijing PM 2.5 levels which exceed 500 make global news. But levels twice as high, say 1,000 or more in Delhi, are not noticed by the media.

Interesting, that Harris should make an observation which exposes two things: the global media’s double standards. It keeps an unsparing critical eye on China. This, because China is in winnable competition with the West. Therefore, the western media is part of the armoury to keep China under pressure.

India, by comparison, is indulged, strung along, not perceived as a threat as far as the eye can see. The high comfort level of the Indian elite in being intellectually colonized can be traced to the nature of the national movement.

A section of the Indian elite which places some premium on self esteem is riled when well researched Indian journalism on the filth, squalor, the pollution augmented by 500,000 automobiles willfully disgorged on Delhi’s roads each year falls on deaf years. Only when an expat reporter focuses on Delhi’s impending catastrophe does the establishment wake up.

The AAP government is struggling to find its feet in Delhi. Instead of helping it attend to Delhi’s problems, every vested interest, each political party is out to waylay it. Modi needs to give the Delhi government a helping hand to save India’s capital city.

(A senior commentator on political and diplomatic affairs, Saeed Naqvi can be reached on saeednaqvi@hotmail.com. The views expressed are personal.)