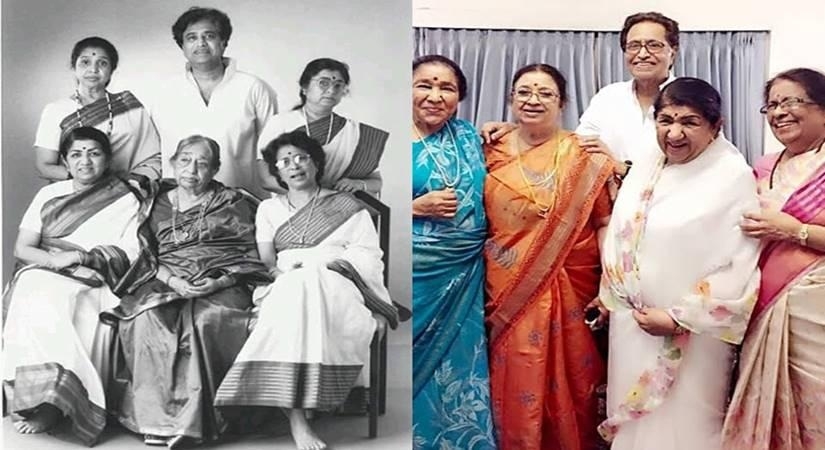 On a cold Sunday morning, India awoke to the heartbreaking news that the “Nightingale of India” and legendary singer Lata Mangeshkar passed away. On December 29, 1929, in the home of musician Pandit Deenanath Mangeshkar, a daughter named Hema Mangeshkar was born. Five years later, her name was changed to Lata.

Pandit Deenanath Mangeshkar was a Marathi performer, and Lata appeared in his musical plays as an actress. The family surname was changed from Hardikar to Mangeshkar in order to identify with their birthplace, Mangeshi in Goa.

Lata Mangeshkar was the eldest of the Mangeshkar siblings, which included sisters Meena Khadikar, Asha Bhosle, and Usha Mangeshkar, as well as brother Hridaynath Mangeshkar. Each sibling is a well-known artist, and have left their mark on the country with memorable gems.

Lata plays an important and sweet role in her siblings’ lives. When Lata was 13 years old, the family’s sole breadwinner, her father, died, and Lata, as the eldest had to begin working.

Lata Mangeshkar went on to create an illustrious career which spanned over six decades and thousands of songs. The veteran singer sang melodies in over thirty-six Indian and foreign languages, with a focus on Hindi and Marathi. She is known as the Nightingale of Bollywood and was awarded the Bharat Ratna, India’s highest civilian honour, in 2001, making her the second vocalist to receive this honour after M. S. Subbulakshmi.

She was named the Nightingale of India and the Nation’s Daughter, receiving numerous awards and accolades throughout her career. She traveled a long road, from her family life to her love life.

According to reports, Lata Mangeshkar was in love with Maharaja Raj Singh of the Dungarpur royal state, her brother Hridaynath Mangeshkar’s best friend.

Raj was once invited to tea at Lata’s house after playing cricket. This is Raj Singh’s first meeting with Lata, and they quickly became friends. Raj used to call her “Mithoo” because he adored her. He always carried a tape recorder in his pocket, on which he recorded Lata’s songs.

Lata and Raj were in love. Raj is said to have promised his parents he would not marry a non-royal, and so both remained unmarried. The singer, on the other hand, has always maintained her responsibilities towards her family were her priority.

While the nation mourns her passing, leaving a permanent void, her praises will be sung for generations to come.