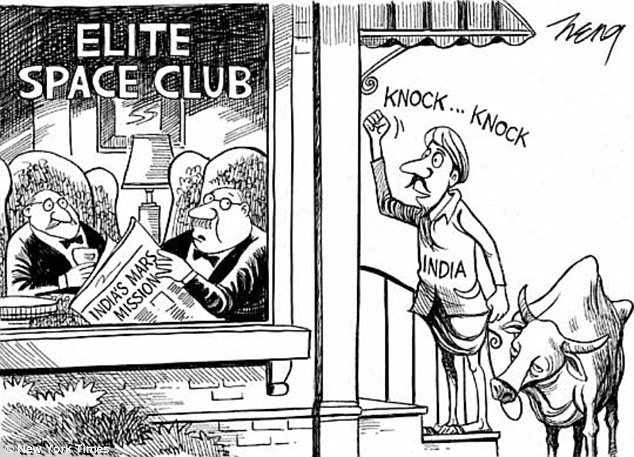 The cartoon showed a farmer with a cow knocking at the door of a room marked Elite Space Club where two men are reading a newspaper on India’s feat, BBC reported.

The cartoon was carried Sep 28 with an article titled India’s Budget Mission to Mars.

After a “large number of readers” complained about the cartoon, Andrew Rosenthal, editorial page editor of the New York Times, wrote in a Facebook post: “The intent of the cartoonist, Heng Kim Song, was to highlight how space exploration is no longer the exclusive domain of rich, Western countries.”

“Mr Heng, who is based in Singapore, uses images and text – often in a provocative way – to make observations about international affairs. We apologize to readers who were offended by the choice of images in this cartoon.”

Rosenthal said Heng “was in no way trying to impugn India, its government or its citizens”.

The total cost of the Indian mission was put at 4.5 billion rupees (about $74 million), which makes it one of the most inexpensive interplanetary space missions ever.

Only the US, Russia and Europe have previously sent missions to Mars, and India succeeded in its first attempt – an achievement that eluded even the Americans and the Soviets.

US citizen arrested in Chicago for attempting to join ISIS