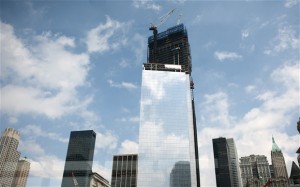 The 72-story Four World Trade Centre becomes the first skyscraper that opens its revolving doors for business on the original 16-acre site where about 2,700 people were killed when hijacked airplanes crashed into the World Trade Centre twin towers, Xinhua reported.

“Four World Trade is the first building to be completed within the borders of the original World Trade Centre, and is a testament to the strength and resiliency of New Yorkers,” New York Mayor Michael Bloomberg said at an outdoor ribbon-cutting ceremony for the glass building.

“For New Yorkers, Four World Trade Centre is not just the next great building to grace our skyline. It’s a symbol of our resiliency, and a testament to our will,” Manhattan Borough president Scott M. Stringer said at the ceremony.

“And this is just the start. Next year, One World Trade will follow, helping to continue the amazing revitalisation of Lower Manhattan and its business community. This is a proud day for New York city,” he said.

Designed by Japanese Pritzker-Prize winning architect Fumihiko Maki, the 298-metre tower is the smallest among the four main buildings planned for the site.

One World Trade Centre, the crown jewel at the complex, will not be completed until early 2014. Rising 541 metres from the ashes of Ground Zero, it was designated the tallest skyscraper in the US Tuesday.

The Port Authority and the Human Resources Administration for the City of New York are the building’s only two tenants for the time being, taking up nearly 60 percent of its new office space. Office workers are expected to move into the tower early next year.