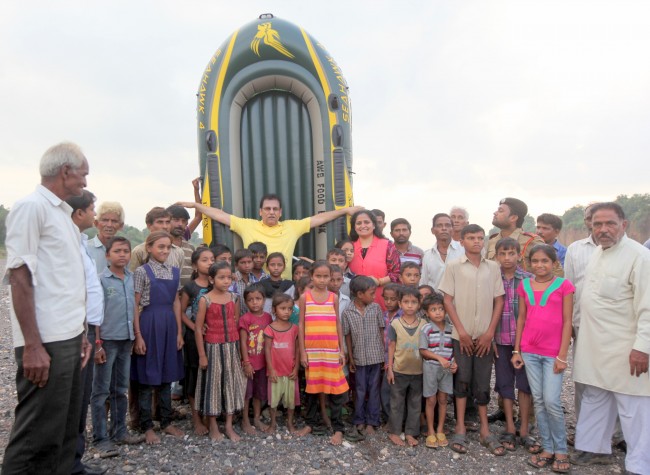 New York, Dec 15 (IANS) Children from many tribal villages in Gujarat’s Chhota Udaipur district once had to swim across the raging Hiran river every day during monsoons to reach school in Utavadi village in Narmada district. Many of them carried a gohri, a 20-litre brass pot that they held on to to stay afloat as they crossed the 600-metre tributary.

Their ordeal will now be over, thanks to the gift of an inflatable power boat by a New York-based Indian-American couple.

Ratna Bhalla, deputy director of emergency housing at Nassau County, Long Island, was planning a family trip to Disney World in Florida when her husband Varinder Bhalla told her about a story of the children’s plight he had read in an Indian daily.

Bhalla, a mechanical engineer in the US for the past four decades, “was restless till he connected with the news reporter, who in turn put him in touch with the villagers and the school authorities to find possible solutions”, Ratna Bhalla told IANS. 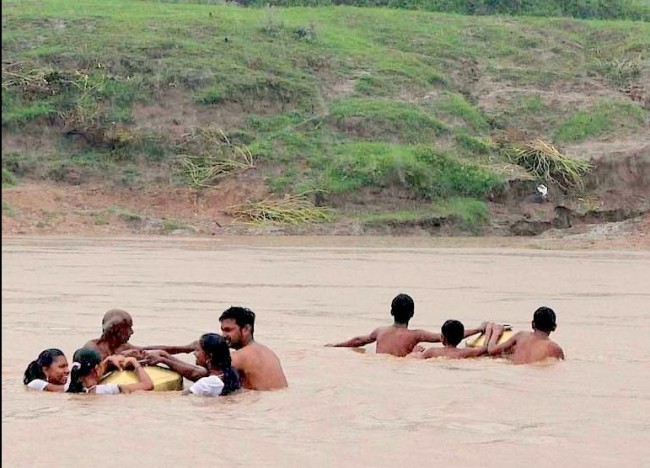 The Bhallas, who founded the AWB Food Bank in 1991, a Delhi-based charity which has distributed over 10 million meals to needy children in the last 23 years, decided to go to India to work out a solution.

After toying with many ideas – like opening a school in Sajanpura and renting a bus to transport the children over a bridge 20 km away – the couple finally hit upon the idea of an inflatable motor boat.

The Bhallas trained the village elders to navigate the boat they carried from New York, with safety and precautionary measures, stressing the need to wear life jackets.

On the chosen auspicious morning, they launched the boat in the river with the children.

They started with the distribution of sweets and breaking a coconut as per the age-old Hindu ritual, while a village elder prayed for the success of the mission.

The children’s eagerness and excitement knew no bounds as they embarked upon their first river crossing in a motor boat.

Their nightmare had finally ended and the villagers heaved a sigh of relief.

“For me and my wife, it was one of the most fulfilling days of our lives,” said Varinder Bhalla. “And it was as good as going to Disney World,” added a jubilant Ratna.

The exhilarated villagers on the other side of the river received the Bhalla couple with garlands. The children are dedicated to their studies and determined to succeed. They consider the gift of a boat from the AWB Food Bank as a loan from a bank and are committed to return this debt when they become successful in life by similarly helping others in need or distress.

Volunteers of Bhagwan Shree Lakshami Narayan Dham, a charitable and spiritual organisation, from Mumbai, Delhi and Vadodara joined the Bhallas in their rescue mission and also donated a battery for the motor boat.

The management of Inphynyt, one of India’s leading manufacturers of automotive and industrial batteries, also lent their support by donating a costly marine battery.

The Bhallas are now back in New York but keep in touch with the villagers and the children in Gujarat.

“We are Punjabis, I am from Amritsar and my wife from Delhi, but we may have discovered that we are Gujarati at heart,” said Varinder Bhalla.