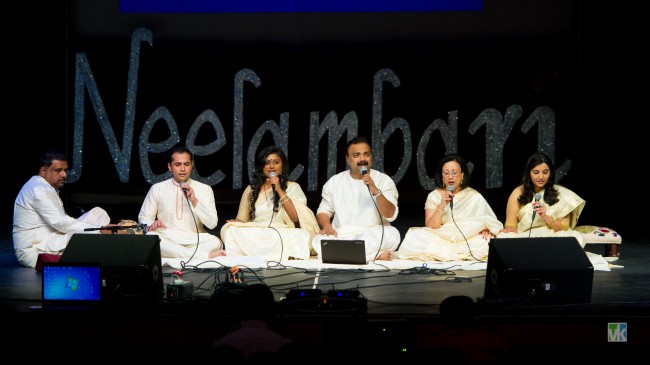 Atlanta, GA, November 2016: Neelanjali – A tribute to the eternal maestros, presented by Neelambari enthralled music lovers across Atlanta with a unique musical extravaganza featuring golden melodies from a range of languages including Malayalam, Tamil, Hindi and Kannada on November 5, 2016 at Norcross High School. The annual anniversary event starred well over 50 participants including kids ranging from five to 16 and adults, with an audience of over 400.  Emcees Sathi Nagarajan and Arun Madangarli kept the evening interesting and entertaining.

Incepted in 2002, “Neelambari came into existence as a family group, mainly to encourage the children of people of Indian origin in the art of appreciation and practice of Indian music and related art forms. An effort is made to encourage participation of children in all the four quarterly sessions and the anniversary. Children are encouraged to get training and constantly try for excellence. Neelambari also wants to provide opportunity for other performances like dance by talented members” says Vijay Kumar, founding member of Neelambari.

Neelambari has several members who are celebrities in the field of music or dance. Sathish Menon, singer, dancer and organizer, has been invited multiple times by famed playback singers like K S Chithra and Venugopal to share the stage with them during their North American stage programs.

“He is a complete artist and a visionary, and is one of the nucleus members of Neelambari,” says Vijay Kumar.

Another star performer Srinath Kalavichiratti was the winner at the reality music competition ‘Ragamaalika”, sponsored by Jaya TV in 2007. Srinath has performed on several stages across the spectrum of all South Indian languages.

Geethu Venugopal was a finalist at the music reality show “Gandharva Sangeetham” sponsored by Kairali TV, in 2013. She is also a play back singer having performed under famous music director Ouseppachan (Malayalam). Meghna Nagarajan and Movina Nagarajan, the winners at IACA Beauty Pageant have made invaluable contributions to the family by dancing, singing and choreographing for the programs.

Neelanjali, like the rare and radiant ruby,  came together to offer a fine musical bonanza to the audience.