Gayatri is an alumna of Chennai-based Bharata Kalanjali founded by the legendary dance gurus, Padmabhushan Shri VP Dhananjayan and Shantha  Dhananjayan. She has also trained in this divine art form under the able guidance of Smt. Radhika Shurajit, one of the senior disciples of the Dhananjayans.

Lord Krishna is one of the most celebrated deities in the Indian culture. Stories of his birth, his playfulness endeared everyone to him and the melody of his flute brought everyone flocking to him, making them forget everything. He always lived life, with an edge of danger, right from the time of his birth but he faced them all, with a lilting smile on his lips, for Krishna is but an avatar of the supreme Lord Vishnu. His life-lessons to Arjuna, is known as the Gitopadesam and stands good even today for all of us, mere mortals. 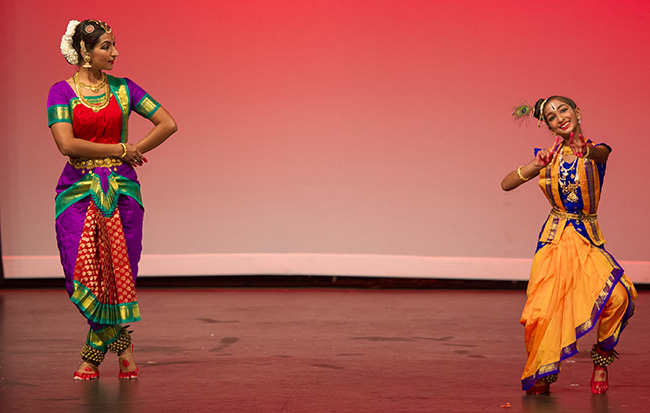 The mission of Darshini Natyalaya is to inculcate moral values and uphold culture and tradition in young adults, through Bharatanatyam. Gayatri’s keen sense of aesthetics and detailing is evident in every aspect of her students. Discipline and devotion to the art are the hallmarks of Gayatri and Darshini Natyalaya.

A visual treat, Krishna Katha, took the audience through the birth of Krishna to his Gitopadesam.