Atlanta, GA: North American Telugu Association (NATA) celebrated its inaugural fundraiser event, NATA Day, in the 2014 convention host city Atlanta, GA with pomp and grandeur on Saturday Feb 22. The event was held at the sprawling Lanier Conference Hall. A record $434,000 was raised, creating a new record for contribution from a single city in one day in the 30-year history of non-profit organizations. 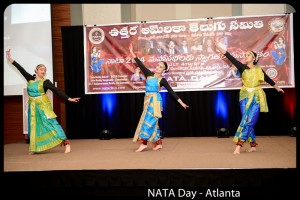 NATA 2014 Convener, Bala Indurti, attributed this unprecedented success to the Telugu community of Atlanta. He also expressed his gratitude to the local Telugu associations TAMA and GATA, for their complete support in helping the Atlanta team achieve this spectacular accomplishment to support the NATA 2014 convention. He thanked all participants from national and local organizations TANA, NATS, TCI, AmrutaVarshini, Vibha, Maitri, Isha Yoga, ArtOfLiving, Hindu Temple of Atlanta, Sai Temple of Atlanta. He further added that the NATA Atlanta team is eternally grateful to work under the able leadership of President Dr. Sanjeeva Reddy and carry out his initiatives flawlessly.

The biennial NATA convention, held once in 2 years, is going to be a mega event of its kind where over 10,000 people of Telugu origin are expected at the GWCC Convention center in Atlanta downtown for the three day period of July 4th – 6th. In addition, the convention will be transmitted LIVE through many leading TV channels to millions across US, Canada and India. All arrangements are in full swing to make the 3-day fun festival surpass all expectations and provide maximum value to all the people in attendance. With the blessings and guidance of NATA leaders Dr. Prem Reddy and Dr. Malla Reddy, President Dr. Sanjeeva Reddy and the NATA Atlanta convention team are working tirelessly to ensure that the 2014 convention meets the immense expectations of the guests.

The delightful evening saw a packed audience of more than 600, who enjoyed a sensational array of cultural programs. The program started off with a traditional “జ్యోతి ప్రజ్వలన” Jyothi Prajwalana. Venkat Chennubhotla provided audio support and energetically emceed the cultural extravaganza that included superlative songs, melodious music, dazzling dances in a fantastic atmosphere of goodwill and entertainment. Star attraction, Sudhamayi, supported by local talent from Atlanta that included Ram Durvasula and Venkat, enthralled the audience with their haunting melodies. Atlanta’s Shiva Turlapati wowed the audience with breathtaking dance sequences from his school of dancing with performers from tender ages. Smt Neelima Gaddamanugu presented exquisite cultural dance performances with her young and talented students. The audience also appreciated an inspiring speech from the special guest, Telugu film actress Laya, who encouraged all lovers of Telugu culture to step forward and support all activities leading to the NATA 2014 convention.

Atlanta based global software solutions provider Paramount Software pledged $50,000 as a Corporate Grand Sponsor for the 2014 Convention. This act in itself is unparalleled and deserves a special recognition and our big thanks to Pramod Sajja, CEO of Paramount, said the organizers. Grand donors with pledges of $25,000 and above include Srini Vangimalla & Dilip Tunki (Serenity Infotech), Srinivas Nimmagadda (VenSai Technologies), and Prashant Kollipara (Bytegraph Productions). Other prominent donors with $10,000 and above are Bala & Madhavi Indurti, Ravi & Hema Kandimalla, Goutham & Jyoti Goli, Dr. Adishesha Reddy, Kiran & Sridevi Kandula, Dr. Mahender Reddy, Vishwanath Dasari, Upender Reddy Kadire, Bindu Reddy, Phani & Aparna Paladugu, Arun Katpalli, Srinivas Lavu, and Sunil Shavale. There were 15 donors with $5000, 27 donors with $2500 and 36 donors with $1000 pledges.

Production chair Satya Karnati and AV/Infratructure chair Jagadeesh Cheemarla deserves praise for their hard work and support. Dr. G.V.Rao and Sridhar Vakiti helped tremendously in capturing all the wonderful moments through their skillful photography.  Food coordination by Goutham Goli and Ramana Reddy Doddla and transportation coordination by Raghu Goverdhana. Web and online media by Siva Gaddamanugu, Prameela Gopu, and Lively Ads Nagaraj.  The NATA Atlanta team, in turn, is grateful to Dr. Sanjeeva Reddy and Sreedevi garu for their encouragement and guidance on all aspects by taking the time to be with the team in Atlanta through all major events. A special note of thanks goes to Atlanta Mayuri restaurant for their delicious food and excellent service, which was not compromised in any form or fashion in spite of the record turnout of 600+ guests, which was much more than the anticipated 400.

The NATA culture of positive thinking and cordiality was evident in the informal and warm way the leaders greeted all of the attendees in a fun filled atmosphere with respect towards all. The cordial camaraderie and the strong rapport between the various teams, the dynamic activities of these members, the resplendent positive energy that effuses from this charged atmosphere together leave no doubt that NATA 2014 convention will surpass all expectations for all attendees and set a new mark for entertainment and progress.