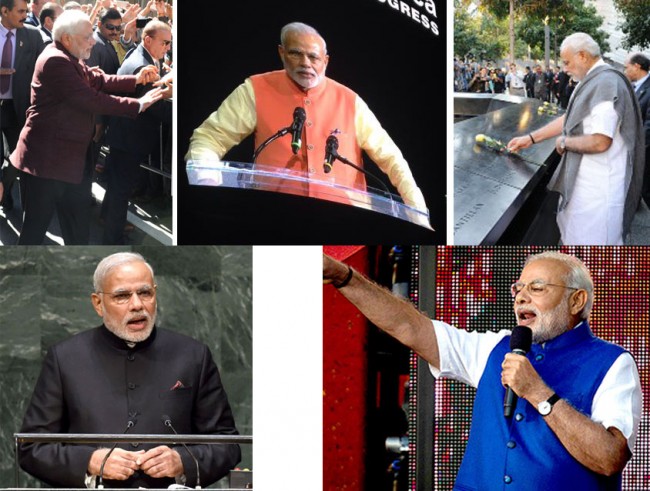 New Delhi, Sep 29 (IANS) From neatly-cut and well-fitted bandhgala suits in different shades to his trademark half-sleeved kurta and brightly coloured Nehru jackets, Prime Minister Narendra Modi not only dressed appropriate to the occasion, but has also looked “classy” during his ongoing US trip, where he was seen to change his attire with almost every event or meeting.

Modi’s wardrobe for the five-day US trip, which is packed with series of bilateral meetings, public appearances and formal dinners, has been prepared under the guidance of Mumbai-based designer Troy Costa, known for his smart cuts and fine tailoring.

Troy’s efforts and Modi’s sartorial consciousness have got thumbs up from fashionistas who feel he has infused “a great sense of colour and energy for a politician.”

If bandhgala jackets are important aspect of his dressing, they are favourite on the ramps too for men.

“His haircut, his well-trimmed beard, his overall dressing right to his shoes, during this US trip, shows a great deal of elegance, and he looks very refined too,” Mehta told IANS.

Troy has not only applied cultural appropriation to his clothes, he seems to have emphasised on finesse of the outfits too.

He changed into black trouser and white shirt and added a dash of brightness by slipping into a burgundy-coloured bandhgala jacket when he arrived in New York.

For his meeting with New York City Mayor Bill de Blasio, he looked dapper in his formal attire that consisted of black trouser, white shirt and bandhgala jacket in light khaki shade and a formal black shoes, but for his speech at the 3rd Global Citizen Festival at Central Park in New York he flaunted his trademark white half sleeve-kurta and churidars and topped it with a striking cobalt blue jacket and black sandal.

It’s a known fact Modi, who hails from Gujarat, has a penchant for bright colours and it was evident when he attended a power dinner with Reliance Industries chief Mukesh Ambani and PepsiCo CEO Indra Nooyi in a peach bandhgala cut sleeve jacket worn over a cream silk kurta.

However, when he addressed the UN General Assembly, he kept his wardrobe absolutely formal by dressing in a dark coloured bandhgala suit.

Modi, known to have very specific fashion likes and dislikes, is seen changing clothes despite a busy schedule.

“He has infused a great sense of colour and energy for a politician. Gujaratis are known for their sartorial cultural legacy and Narendra Modi does justice to the six thousand year old legacy of India with aplomb,“ Rodricks told IANS.

He still has many meetings to attend before he returns to India Oct 1 and dress watchers would be keenly observing his sartorial styles as he heads towards the more business aspects of his visit.

After wowing the Big Apple, Modi off to win Washington