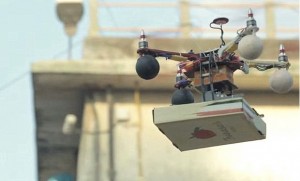 Mumbai, May 22 (IANS) An experimental delivery of pizzas using a remote-controlled drone to a customer in a skyscraper here has raised security concerns, with Mumbai police and civil aviation authorities seeking explanation from the company.

Mumbai police officials have decided to seek explanation from the company, Francesco’s Pizzeria in south Mumbai, while Air Traffic Control (ATC) officials said norms stipulate taking permission prior to flying any object in the sky.

However, a company spokesperson rejected the security concerns of the police and aviation authorities, and said to ensure that security was not breached, such small aircraft are not allowed to fly over an altitude of 400 feet.

Besides, they are barred from flying over any security establishments in and around the city, the spokesperson said.

Moreover, after flying a distance of around eight km, the drone’s battery automatically drains out, making it non-operational.

“In the experiment a few days ago, the drone used for delivering the pizza cost around $200. It is considered a long-term ecological alternative for such purposes as it consumed less than 65 watts energy, or that of a small light bulb,” the spokesperson said.

The drone experiment, conducted May 11, was conceptualised by Francesco’s Pizzeria owner Mikhel Rajani.

Later, the concept was implemented by Fahad Azad, an auto engineer from M.S. Saboo Siddik College of Engineering, who is also a former IIT graduate.

However, there are possibilities that the Federal Aviation Administration of the US may announce certain regulations next year (2015), which could spur similar developments on this front in India.

The police apprehensions stem from regular inputs pertaining to terror threats over the city through unmanned flying objects like drones or paragliders.

In fact, to ward off any such threats, during special occasions, several sensitive areas in the city are declared “no flying zones”.

The May 11 experiment involved a small four-rotor drone taking off from the outlet in Lower Parel and delivering a pizza safely to a customer in a skyscraper in Worli, around 1.5 km away.

The spokesperson emphasised that they had taken full care to ensure that it flew only between 200-400 feet in the air, and was never out of sight of the remote controller. A full video of the delivery was made from the ground as well as miniature on-board cameras.