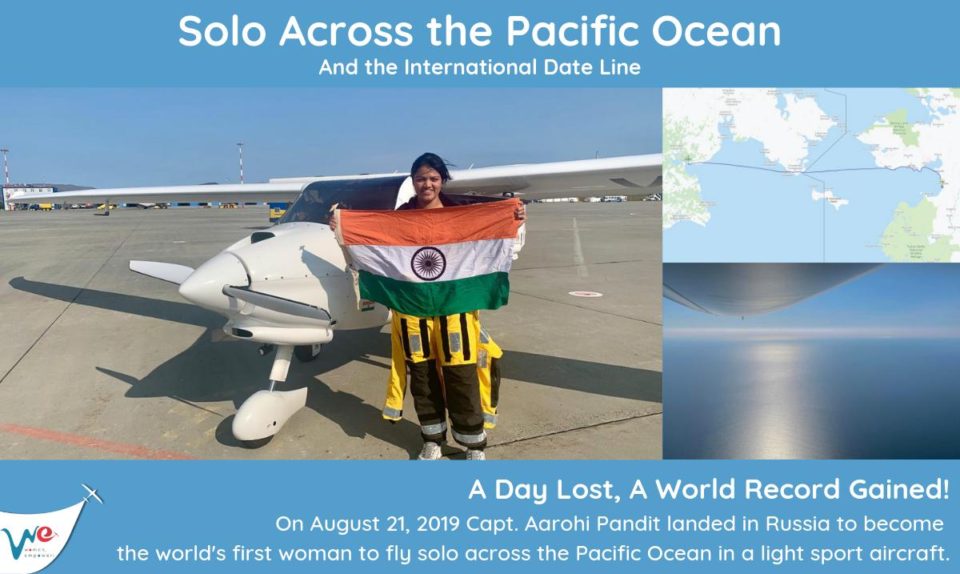 Mumbai, Aug 21 (IANS) Mumbai girl Aarohi Pandit, currently on a global flight in a small plane, on Wednesday created history by becoming the first woman pilot to cross both Atlantic Ocean and Pacific Ocean solo in a Light Sports Aircraft.

Flying from Alaska’s Unalakleet city across the Pacific Ocean’s Bering Sea, she landed safely at the Anadyr Airport in Russia’s Far East region of Chukotka at 01.54 a.m. after a stopover at Nome (Alaska). After landing, Aarohi, appearing a bit weary but cheerful, posed for a photo before her LSA and waved the Indian tricolour.

In mid-May this year, Aarohi, 23, became the first woman in the world to cross the Atlantic Ocean solo in a LSA, thrilling her family, friends and aviation circles. (IANS reported the story on May 14).

In the past nearly 13 months of her circumnavigation flight, she has broken and created several records, including becoming the world’s first woman to complete a solo flight over the treacherous Greenland ice-cap in an LSA, and the first woman to fly all across Canada from the North East to the North West via the South, said her team in Mumbai.

“Aarohi truly represents all that young Indian women are capable of, given an opportunity. We are very proud and she has set such a great example for all other girls to emulate,” an excited Lynn de Souza, founder of Social Access Communications, which organised the WE! Expedition, told IANS.

On her part, Aarohi considers the Pacific Ocean crossing as the most significant sector for the Women Empower Expedition (WE!) circumnavigation, marking its entry into a new country, a new continent and a new day.

In her 1,100 km flight from Unalakleet to Anadyr, Aarohi flew across the International Date Line, also known as the Line of Confusion, when the date changes and all instruments conk off for a few minutes.

For the main and challenging leg of the crossing, Aarohi took off from Nome at 2 p.m. on Tuesday and after a 3 hou, 50 minute flight, she landed at Anadyr on Wednesday.

“I lost one day of my life which I will never get back..” she said jokingly about the IDL crossing, but said she would always treasure the experience.

“The Pacific Ocean flight was more beautiful than the Atlantic Ocean crossing and it was also one of my most enjoyable. I feel honoured to achieve these records for India and women all over,” Aarohi said after her landing at Anadyr.

An Indian commercial pilot licence and LSA Licence holder, Aarohi launched the world’s first all-woman team to circumnavigate the Earth in her LSA, named “Mahi”, on July 30, 2018, along with her friend and pilot, Keithair Misquitta.

“Mahi” is a tiny single engine Sinus 912 aircraft, weighing less than a Bullet motorcycle, manufactured by Slovenia’s Pipistrel, and is the first LSA registered with the Director-General of Civil Aviation (DGCA) India.

Since the tiny cockpit had to be equipped with a life-raft, oxygen system and other safety gadgets for the trans-oceanic flights from Britain onwards, Aarohi undertook the remaining expedition solo.

She was accompanied by Pipistrel’s Canada President Jonah Boll for photography over the Canadian Rockies, and will have woman navigator Olga Eroshenko alongside as she flies across Russia, as stipulated by the Russian civil aviation regulator.

Besides, she had to cope up with various physical and mental exercises to help her take on the toughest terrains and weather conditions while being all alone in the cockpit.

Aarohi is an ardent fan of the legendary American aviator, Amelia Earheart — who became the world’s first woman to make a solo transatlantic flight in a bigger aircraft, 87 years ago, on May 20, 1932.

Till date, Aarohi has logged in 29,500 kms in 50 legs across three continents and 20 countries in her small LSA.

Now, the WE! Expedition will continue westward to fly back from Russia to India after spreading the message of “girl-power and friendship” beyond boundaries, said de Souza.