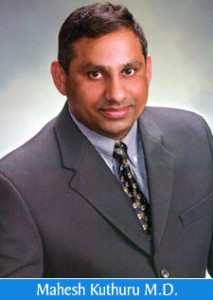 Washington, March 6 (IANS) An Indian-American physician has been indicted for health care fraud in Syracuse, New York, and faces up to 30 years in prison with a million dollar fine if convicted.

Mahesh Kuthuru, 43, who owned and operated Upstate Pain Management, a medical practice in Utica and Fulton-area, was indicted with his employee Bonnie Meislin, 42, by a federal grand jury last week, according to The North Country Gazette.

The indictment charges Kuthuru and Meislin with engaging in a scheme to defraud Medicare, a government healthcare scheme for senior citizens, by submitting false claims for reimbursement for medical services that were not performed.

According to the indictment, Kuthuru purchased a medical practice in Las Vegas, Nevada, known as Desert Pain Management in November 2008.

By January 2010 through at least September 2011, Kuthuru was spending the majority of his time at his Las Vegas medical practice, coming back to the Utica and Fulton offices to treat patients only on a sporadic basis.

Kuthuru was arrested in Las Vegas Feb 28. He is scheduled to appear for arraignment before US Magistrate Judge Therese Wiley Dancks in Syracuse March 12.

Each of the 30 health fraud counts carries a maximum penalty of 10 years’ imprisonment and a fine of $250,000.

Each of the 15 counts of drug distribution carries a maximum penalty of 20 years’ imprisonment with a million dollar fine.