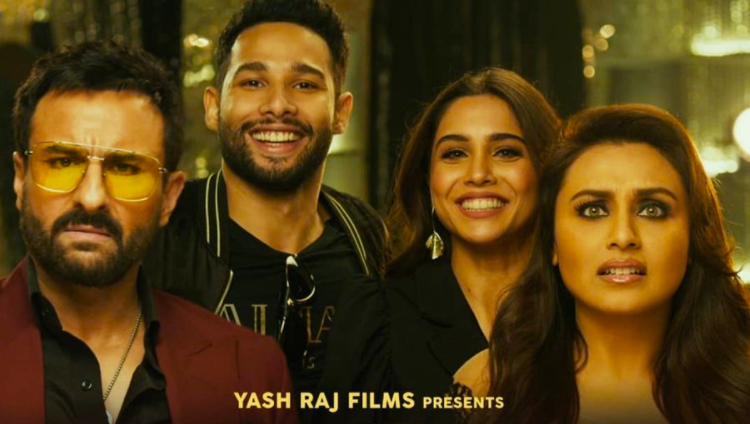 ‘Old wine in a new bottle’ is how one can sum up ‘Bunty Aur Babli 2’ in one phrase. The second part of the immensely popular 2005 movie, ‘Bunty Aur Babli’, starring Abhishek Bachchan and Rani Mukerji, is a frothy comedy with its share of light-hearted moments, but it is essentially a rehash of the earlier film and does not score high on either originality or novelty.

Except for the introduction of the new Bunty (Siddhant Chaturvedi) and Babli (Sharvari Wagh), there is not much newness that this film offers.

The new duo, who are engineering students, are jaded and let down by the system. They are on the prowl and succeed in their kind of con games with ease. Sometimes, sending sex-starved men in a private charter to a non-existing country named Virgin Republic and at other times, giving out the River Ganga on lease to the mayor of the city, the modus operandi remains the same, only the situations change.

Vexed by their success, Police Inspector Jatayu (Pankaj Tripathi), who is gunning for a promotion, hires the original Bunty (Saif Ali Khan) and Babli, (Rani Mukerji) to nab the new con duo.

Rakesh Trivedi (Saif Ali Khan) and Vimmi Trivedi (Rani Mukherji) are now settled in domestic bliss at Fursatganj, UP, where he works as a ticket collector in the Railways, and she is a housewife and mother to Pappi, their son. How the original twosome chip in to trap the new Bunty and Babli by delving into their minds forms the crux of this film.

Some of the situations offer elements of humour, but are mostly oft-seen and repetitive. The dialogues are somewhat funny with a forced attempt at humour.

The weak writing is what does the film in, as the characters appear cardboard-thin and unidimensional. The situational comedy too appears trite and fails to evoke laughter. With no exciting twists or turns in the plot, or even an engrossing climax, the film fails to deliver excitement in any form.

Saif Ali Khan makes a sincere effort. but does not fit into Abhishek Bachchan’s shoes. He lends the character a style of his own, but does not match up to the original Bunty. He seems more in place in the Abu Dhabi scenes, where he poses as Bhullar, a hawala king, rather than as the ticket collector in UP.

Rani Mukerji tries hard with her inconsistent Punjabi accent, but does not leave half the impact she did in the original film and appears over the top.

Siddhant Chaturvedi has a strong screen presence and adds chutzpah to his character with his suave demeanour. He is a delight to watch. Sharvari Wagh too contributes ably and essays her character confidently and with conviction.

Pankaj Tripathi sleepwalks through his role as there is a sense of déjà vu seeing him in a UP set-up and in uniform.

Prem Chopra, Brijendra Kale and Asrani, all competent actors, are wasted in small and insignificant roles. The child artiste playing Rakesh and Vimmi’s son shows a lot of promise and is confident, way beyond his age.

The cinematography by Gavemic U Ary is worth a mention, and the scenes, are stylishly captured, especially the ones in Abu Dhabi. The music, though, lacks lustre. The numbers are disappointing, and despite ‘Tatoowaliye’ and Arijit Singh’s ‘Love Ju’ being catchy, they are not lyrical and worth humming.

Overall, ‘Bunty Aur Babli 2’ falls short of one’s expectations and seems like a feeble attempt at recreating the first film.