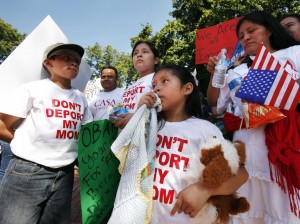 Washington, Feb 7 (IANS) Even as a new poll found that Americans overwhelmingly favor a pathway towards citizenship for 11 million undocumented individuals, including 300,000 Indians, a top Republican has signalled that any action on this is unlikely this year.

A CNN/ORC International survey released Thursday also indicated that a majority of the public says that the government’s main focus should be legalizing the status of the undocumented rather than border security.

But John Boehner, speaker of the Republican controlled House, signaled that any action on immigration is unlikely this year because House Republicans don’t trust President Barack Obama on the issue.

“There’s widespread doubt about whether this administration can be trusted to enforce our laws and it’s going to be difficult to move any immigration legislation until that changes,” Boehner told reporters.

According to the poll, 54 percent say the top priority for the government in dealing with the issue of illegal immigration should be developing a plan that would allow undocumented immigrants with jobs to eventually become legal US residents.

Just over four in ten questioned say the main focus should be developing a plan for stopping the flow of undocumented immigrants into the US and for deporting those already in the country.

The Democratic-controlled Senate last year passed a bipartisan illegal immigration bill that included an eventual pathway towards citizenship for most of the 11 million undocumented immigrants in the US.

However, India has expressed concern over the Senate bill, which while increasing the overall number of H-1B visas for skilled workers, would hike fees and restrict additional H-1B visas for Indian tech firms.

The Senate bill stalled in the House with Republicans, saying they preferred to address the matter incrementally rather than in one comprehensive measure.

Asked to comment on Boehner’s remarks, White House press secretary said: “We remain optimistic about the prospects for comprehensive immigration reform in 2014.”

Suggesting there has been “significant movement among Republicans on this issue,” he said: “It is heartening to see that Republican leaders in Congress — including the speaker of the House and others — identify immigration reform as a necessary priority.”

However, Carney acknowledged, “nothing like this — nothing this important, nothing this comprehensive ever comes fast or easy in Washington, so this won’t be any different.”