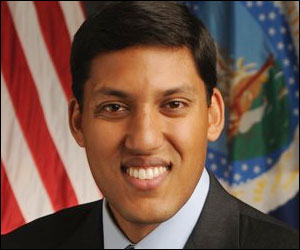 Washington, Feb 7 (IANS) Citing immigrants’ absolute faith in the American dream, Rajiv Shah, the Indian-American administrator of the US Agency for International Development (USAID), has given a call to “end extreme poverty in our lifetime.”

“This is now achievable, but only if all of us-from science, business, government, and faith-come together for the poor,” he said delivering the keynote at the 62nd National Prayer Breakfast.

“We can end extreme poverty for the 1.1 billion people who live on a dollar-and-a- quarter a day,” said the highest ranking Indian-American in the Obama administration.

President Barack Obama attending his sixth prayer breakfast, bringing together legislators, officials, and clergy from all faiths and political ideologies, focused on the importance of freedom of religion – not only in America, but also around the world.

“History shows that nations that uphold the rights of their people, including the freedom of religion, are ultimately more just and more peaceful and more successful.

“Nations that do not uphold these rights sow the bitter seeds of instability and violence and extremism. So freedom of religion matters to our national security,” Obama said.

Shah recalled his childhood “in suburban Detroit, where every family in our Indian-American community had an immigrant story to share-of hard work, sacrifice, and absolute faith in the American dream,”

“When my grandfather gave his life-savings to send my dad to America, I think he hoped-but never could have imagined-how this nation and its values would lift our family,” Shah said.

“That my mom would run an award-winning Montessori school or my dad would one day work as an engineer on the Apollo mission and at Ford Motor Company.”

“As a child, my Hindu heritage was an extension of my community-a place to fit in and feel loved,” he said.

“The desire to connect to my family’s history drew me to southern India the summer after college to help fight disease in a remote community,” Shah recalled.

Obama lavished high praise on Shah, “who is just such an incredible young leader and is out there every single day, I could not be more proud of his outstanding leadership at USAID.”

“And it’s a good reminder of the dedicated public servants that I have the chance to interact with every single day,” he said amidst applause.

“And they do great work, don’t always get a lot of credit, sometimes get subject to the sort of criticism that you do when you’re in public life.”

“But Raj is single-minded in terms of trying to help as many people as possible all around the world and is an extraordinary representative for our country.

“So I’m very, very proud of him — although he does always make me feel like an underachiever whenever I listen to him,” Obama said.

Most Americans favor pathway to citizenship for illegals