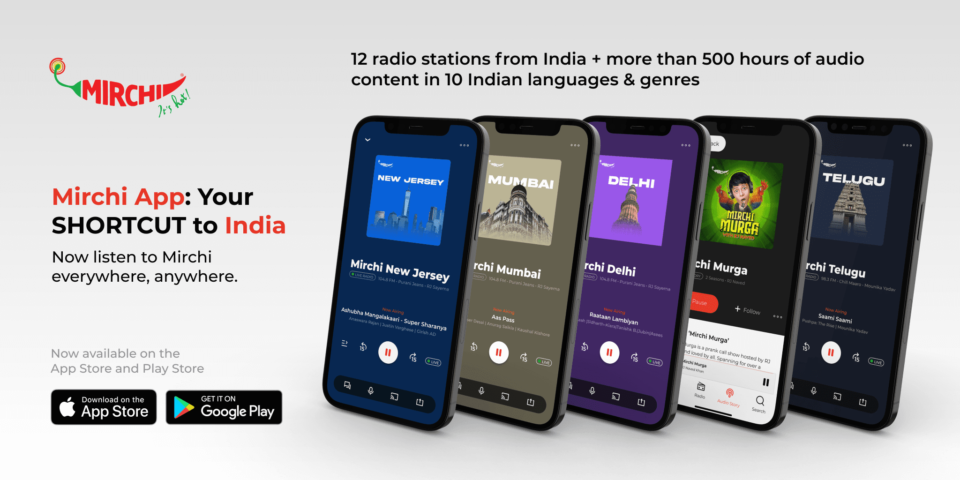 New Jersey/San Francisco, Feb 25, 2002: Entertainment Network India Limited, the company that operates the Mirchi brand in the United States, earlier this week announced the launch of its streaming app.

The app is available on Apple and Android smartphones as well as Android Auto & Apple Car play systems. More countries will be added soon, the company stated.

The city-wide local streams provide a convenient shortcut for the expat community living in the US as the feeds have been adjusted to mirror local day parts. For example, a listener hailing from Mumbai but living in San Jose, will be able to tune in at his morning time for the Mumbai morning show and so on. Besides providing nostalgic value, US based listeners get a feel of home via real-time to developments taking place in their home city in India in the areas of music, movies, traffic, the stock markets, and much more.

The app also has an on-demand feature that includes hundreds of hours of curated “audio stories” across multiple genres. Mirchi staples like like RJ Naved’s lighthearted Murga prank calls; “The Devdutt Patnaik” mythology show; “The Bhatt Show” hosted by Mahesh and Pooja Bhatt; Kareena Kapoor Khan’s “What Women Want” interview series with top Bollywood celebrities and “Manto” written by the legendary Saadat Hasan Manto and voiced by top personalities like Nandita Das, Nawazuddin Siddiqui, and RJ Sayema will be available on the app.

The Mirchi App widens Mirchi’s reach from local terrestrial radio stations in USA to an “on-demand & always on App experience”. Mirchi’s social media presence has been prolific with viral videos and posts, the app now formalizes this listener relationship that allows marketers and advertisers to engage with their audiences through targeted online advertising opportunities.

Commenting on the launch, Mr. Vineet Jain, Chairman of the company said, “The Times of India group has always explored new horizons, pushed boundaries, and innovated to provide the best news and entertainment content to its consumers. We are now bringing the full Mirchi experience to every Indian and South Asian living overseas. With the launch of this app, we further cement our position as a multi-content, multi-format, and multi-lingual music and entertainment brand for desis everywhere.”

Prashant Panday, MD & CEO, ENIL says, “Mirchi, India’s leader in radio and one of its most-loved entertainment brands, is now embarking on a digital journey with the launch of its app. We’ve been leaders in FM radio in India for more than 20 years and now we are making all our radio stations and a lot more audio content available to our listeners outside the country. The app offers brands and marketers across geographies the opportunity to connect with diaspora audiences in the US.”

The Mirchi app can be downloaded from MirchiUSA

Mirchi, owned by Entertainment Network India Limited (ENIL), is a radio and entertainment company that operates India’s largest private FM radio brand with 73 frequencies across 63 cities – Radio Mirchi. Launched in 2001, Mirchi now has a variety of properties under its FM, LIVE, and Digital platforms, each populated with multi-lingual, multi-platform, and multi-format content.
Mirchi now operates in the USA (New Jersey & The Bay Area, California), UAE, Qatar, and Bahrain, bringing content directly from India to the discerning global consumers. Mirchi can also be heard at Rajiv Gandhi International Airport, Hyderabad.

Mirchi provides customized, hyper-local, multi-media advertising solutions to its advertisers. The brand has been growing its listenership, as well as expanding its advertisers’ list through the years. The emphasis on generating results for advertisers, whether it is generating footfalls, creating a buzz, or inducing trails, with a focus on providing end-to-end solutions under one roof, is what distinguishes Mirchi from its competitors.