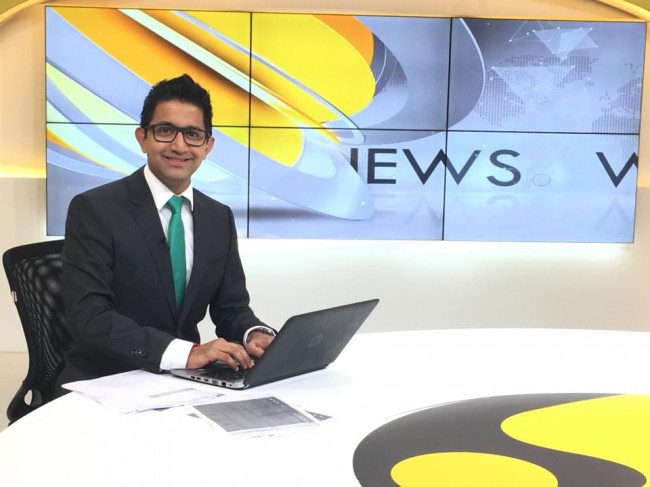 Atlanta’s Archith Seshadri is part of the WION team as a news anchor/reporter. Prior to this, Archith was at CNN International in Atlanta, GA.

WION launched as a free to air satellite service in 37 countries and is available in India on Dish TV. The editor-in-chief is the Emmy-Nominated producer Rohit Gandhi. The new venture aims to tell global news with an unbiased approach.

“For decades, media has been pushing the agenda of a country or a group of countries,” Gandhi said in a post on the WION website. “Primarily Western news outlets have occupied that space and they push their viewpoint. They try and come as close possible to an “unbiased” approach. But they are far removed from reality as they are unable to decipher the intricacies involved. The stories were myopic and many times their selection was biased. The only stories that made to the forefront were about poverty, manual scavenging or the monkeys. I knew that I couldn’t work in a myopic news environment; I had to tell the stories that were nuanced and looked at all sides of a society or societies.”

Zee Media has set up bureaus or hired journalists in the major regions including Europe, west Asia and the US.

The channel says it will also have a strong focus on participatory journalism from viewers. “We encourage people to submit their stories, photos, opinions, comments and videos,” says its website.

Seshadri, who was earlier featured in Indians of Atlanta, a blog and Facebook community maintained by NRI Pulse, had this story to share about his foray into broadcast journalism: “I spent six years consulting for Accenture. But I realized I didn’t want a cushy, traditional desk job that simply just paid well.  My transition to broadcast journalism was gradual – I started attending professional journalism conferences, and networked with people in the industry while holding down my job. While in college, I wrote for the campus paper (The Technique), freelanced for Khabar Magazine and interned at CNN. My first TV news experience was in Macon,GA at 13wmaz where I was a reporter/producer. I would travel down there and work weekends, and stay in the newsroom to get experience — this is where I learned how to shoot, write, edit, report and produce. I spent nearly the next 4 years as an anchor/reporter in Augusta, Gaat WJBF (ABC). I launched the station’s weekend morning newscast, traveled to South Carolina to train with marines and field anchored from the Masters. After nearly 4 years there, I moved to the Fox affiliate in Charlotte, NC where I traveled to Washington DC to cover National Police Week and to Atlanta and filed extensive reports on the Ebola outbreak.”

It makes me smile big and cheers me up: 59 special needs kids gearing up for Dream Show