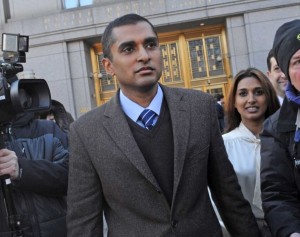 Washington, May 28 (IANS) An Indian-American, who is serving prison term for carrying out insider trading, is hoping to be freed after an appeals court tossed two other insider-trading convictions, according to a media report.

Mathew Martoma, a former portfolio manager for SAC Capital Advisors, said in a court appeal filed on Tuesday that a recent appeals court decision narrowing the definition of insider trading “at the very least… demands a new trial,” the New York Post reported on Wednesday.

Martoma has spent six months of his nine-year jail term in a federal prison in Miami. He has also been ordered to pay $9.3 million, the size of his bonus the year the trades were made, the report said.

Martoma’s lawyers were confident that the evidence against their client would not hold up based on an appeals court ruling that raised the bar for prosecutors and set a new standard for illegal trading.

The Indian-American’s lawyers also claimed racial bias because the only Indian in the jury pool was kicked out by prosecutors.