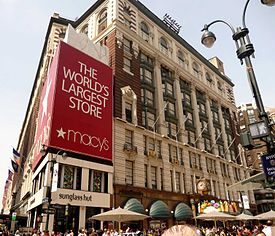 The news caused its stock to plunge nearly 10 per cent during after-hours trading Wednesday.

Macy’s said it expects to layoff about 3,900 workers as a result of the upcoming store closures, and another 6,200 jobs will be cut as the company works to streamline its management team, according to a press release.

A few stores have already been shuttered, but 63 will close down between now and mid-2017, leaving about 660 US stores left open, said the report.

The closings are among the 100 stores Macy’s said last August that it intends to shutter.

Mark Cohen, a professor at Columbia Business School, said it’s not the last time Macy’s will make this type of announcement.

“It’s a very hard day for the folks involved obviously, but I would also say it’s inevitable,” Cohen said. “And there’s definitely more to come.”

Terry Lundgren, who is preparing to step aside as Macy’s CEO this year, said he expects 2017 sales to decline at a similar rate to the company’s holiday performance.