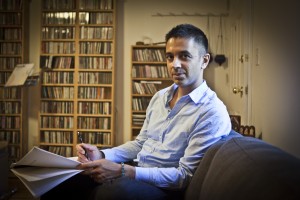 Atlanta, GA: The awards, announced Wednesday by the John D. and Catherine T. MacArthur Foundation, were given to 24 recipients, including Indian-American Vijay Iyer.
Iyer is a pianist, composer, bandleader, electronic musician, and writer forging a new conception of jazz and American creative music through an eclectic oeuvre that includes compositions for his own and other ensembles, collaborations across multiple genres and disciplines, and scholarly research on the act of listening.  An ardent investigator of musical communities, practices, histories, and theories, he mines core rhythmic, melodic, and structural elements from a wide range of sources to construct richly varied, improvisation-driven solo and ensemble music.
Iyer’s compositions for jazz quartet on his album Reimagining (2005) feature elaborate melodic constructions and intricate rhythmic techniques influenced by South Indian classical music, West African drumming, contemporary European composers, and twentieth-century African American piano masters. On Historicity (2009) and Accelerando (2012), he imaginatively rearranges works by Stevie Wonder, Leonard Bernstein, Duke Ellington, Michael Jackson, M.I.A., and others, developing new rhythms, textures, and strategies for the piano trio.
Parallel to these projects, he has expanded his creative practice through frequent collaborations with poets. Holding It Down: The Veterans’ Dream Project (2013) illuminates the lived experience of war and the subsequent return to civilian life, as the dreams of minority veterans from the U.S. wars in Iraq and Afghanistan are rendered as lyrics and set to a restless, poignant electroacoustic score punctuated by moments of improvisation.
With academic training in music cognition, Iyer complements his musicianship with writings for both specialist and general audiences that investigate the ever-shifting relationship between culture, perception, and aesthetics. Through his wide-ranging body of work, Iyer is creating a unique voice in diverse musical contexts while reaffirming the place of music not just as entertainment but as an essential part of human society.
Vijay Iyer received a B.S. (1992) from Yale College and a Ph.D. (1998) from the University of California at Berkeley. His additional recordings include Tirtha (2011), Solo (2010), and Door (2008, with the collective trio Fieldwork), among others. He has performed his music at such venues as Carnegie Hall, Lincoln Center, the Walker Art Center, the Brooklyn Academy of Music, Chicago Symphony Hall, University of California at Los Angeles’s Royce Hall, Köln Philharmonie, Musiekgebouw Amsterdam, and Teatro Manzoni di Milano, as well as dozens of international music festivals and jazz clubs around the world. In January 2014, he will join the Harvard University Department of Music as the Franklin D. and Florence Rosenblatt Professor of the Arts.
The award, which this year was boosted from the previous $500,000, comes in five annual payments, with no strings attached. Winners don’t need to tell anyone how they’ll spend the money. There are no reporting requirements.
The MacArthur award has been bestowed on 873 other MacArthur Fellows since the program began in 1981. It is given to individuals with a track record of achievement — and the potential for even more significant contributions in the future.
Courtesy: http://www.macfound.org
previous post