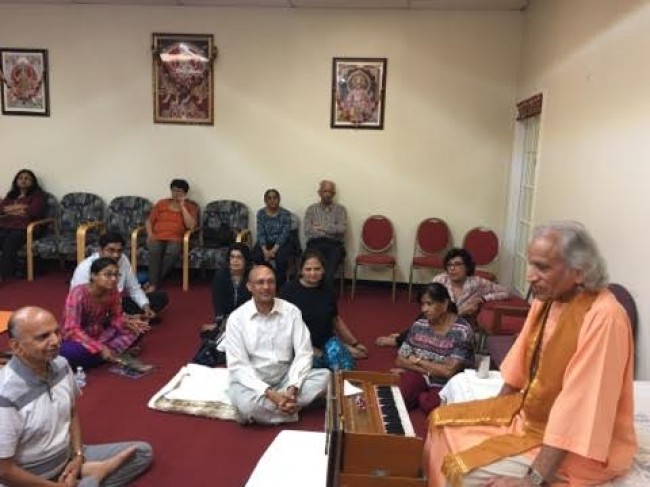 Atlanta, GA: Yogi Amrit Desai is one of a handful of gurus who came to America from India in the early 1960s. This wave began the initial yoga craze in the west. Yogi Desai is one of the first arrivals and the last living guru from this initial wave, and a pioneer in bringing the authentic practices of Yoga to the west.

On June 22 and 23, yoga enthusiasts availed of Gurudev Desai’s lectures on the healing miracles of yoga and yoga nidra at the Siddhi Vinayak Temple in Global Mall. The lectures, which included guided yoga nidra sessions, were hosted by Shiv Aggarwal of Global Mall.

Yogi Desai guided attendees, who were in a comfortable lying down position, through a series of breathing exercises and simple instructions. Within a short time, the attendees became submerged in the alpha state.

“Over 80% of health problems are stress-related,” the Yogi earlier said. While conventional, alternative and holistic medicines treat only the symptoms, “yoga nidra goes beyond the ego mind, and removes karmic memory and energy blocks that cause inner conflict.” He likened the effect of yoga nidra on health problems to tackling the submerged as well as the visible parts of an iceberg.

Yogi Desai lamented that around the world, practitioners are fixated with only the physical aspects of yoga. “Real yoga is not practiced even in India. The physical cannot be separated from the mind. Real yoga creates balance inside you,” he said.

According to Deepak Chopra, “Yogi Amrit Desai is a pioneer in introducing Yoga to the West, but more significantly through his unique style, his method of teaching draws upon the original spiritual depth that is missing in the popular practice of Hatha Yoga.”

Following in the footsteps of Swami Vivekananda and Paramahansa Yogananda who popularized yoga in the west, Yogi Amritji has played a key role in recapturing and restoring the profound power of the authentic teachings of Patanjali’s Ashtanga Yoga and Yoga Sutras. Since the time of his arrival in the U.S. in February 1960, he continues to make a significant impact on transforming the history of yoga in the western world.

Yogi Desai started teaching yoga in the early 1960s in the Philadelphia area. In the late 60’s he formed The Yoga Society of Pennsylvania. He went on to start 5 yoga and health centers. By 1994, Yoga teachers trained in the systems developed by Shri Amritji were teaching in 52 states and 45 countries around the globe. To date, more than 8,000 Yoga and Yoga Nidra teachers have been certified.

In 2001, Yogi Desai started the Amrit Yoga Institute (AYI), Salt Springs, Florida. This thriving yoga ashram and program center offers professional trainings in Yoga, Yoga Nidra, Yoga Therapy, and Quantum Breath meditation, as well as in a wide range of health- and spirituality-related programs. In 2014, Amritji co-founded the International University of Yoga and Ayurveda, which offers in-depth coursework and certification for Ayurvedic Practitioners, as well as Pancha Karma detox programs on the AYI campus.

Amongst his many awards, honors and titles, he is the recipient of the International Yoga Grand Master 2013 title from Padma Shri H.H. Jagat Guru Amrta Suryananda Maharaj. The only previous recipients of this award are Padma Shri Dr.H.R. Nagendra, SVYASA University Bangalore and B.K.S. Iyengar. He was also nominated for the Padma Vibhushan in 1992.