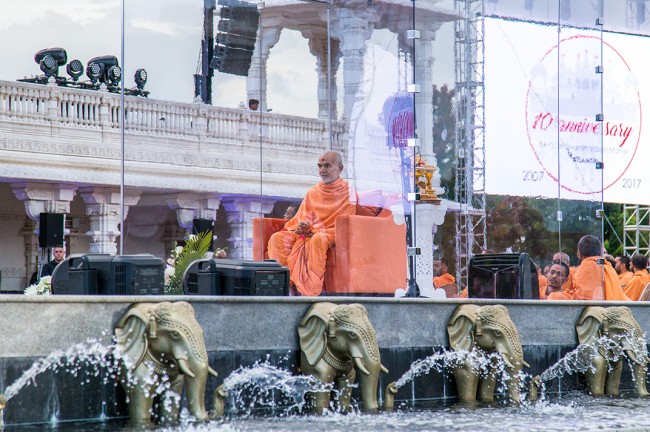 Atlanta, GA: His Holiness Mahant Swami Maharaj, the current spiritual leader of the BAPS Swaminarayan Sanstha, joined devotees and well-wishers in celebrating the ten-year anniversary of the BAPS Shri Swaminarayan Mandir in Atlanta, GA on July 1, 2017. The Mandir was inaugurated by His Holiness Pramukh Swami Maharaj in 2007 and has helped enrich the local community through the development of family and youth programs, community outreach, and spiritual assemblies. A true labor of love, the Mandir offers weekly services and year-round programs organized by volunteers and Swamis within the BAPS community.

As a central place of Hindu worship, the BAPS Shri Swaminarayan Mandir opened to the community on August 26, 2007 and was made possible by the spiritual support, guidance, and inspiration of Pramukh Swami Maharaj, the fifth spiritual successor of Bhagwan Swaminarayan.  Today, Mahant Swami Maharaj carries forward this work and legacy as the current spiritual successor of Bhagwan Swaminarayan.  Through his leadership and guidance, Mahant Swami Maharaj invites people of all faiths and cultural backgrounds to visit and explore the mandir, its architecture, and its Hindu teachings. 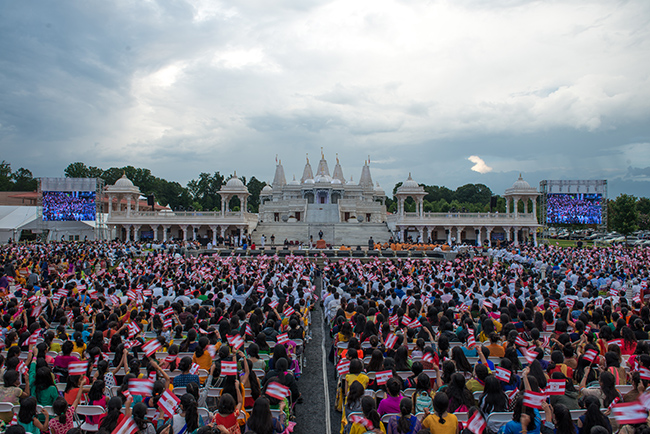 Heer Patel from Memphis, Tennessee was relatively new to the BAPS community during the inaugural ceremonies in 2007 and recalled the event with great enthusiasm, “[Pramukh Swami] was truly someone special that was able to attract thousands of people from different backgrounds and bring them together for one purpose. I was not never really interested in spirituality, but after the memorable interactions with Pramukh Swami Maharaj when he inaugurated the temple in 2007, I became more and more connected with the temple.” Patel was a volunteer at the 10 year celebrations. “It has been such an amazing experience to have just as amazing interactions with Mahant Swami Maharaj as we celebrated the 10 year anniversary of the mandir”.

Since Pramukh Swami Maharaj’s visit, participation within the local community and beyond has grown, and hundreds of individuals regularly attend celebrations of Hindu festivals throughout the year.

The BAPS Shri Swaminarayan Mandir in Atlanta is the first of its kind in the region, and community volunteers welcomed the ten-year anniversary celebrations in the presence of Mahant Swami Maharaj with the same zeal and excitement they experienced back in 2007.

The anniversary celebrations were primarily created and led by the youth of BAPS who have been preparing for the arrival of Mahant Swami Maharaj for several months. Yash Soni from Parkland, FL says, “By participating in various performances during the 10th anniversary celebration, I have felt a deep connection with my guru and developed a greater understanding of samp (unity) and teamwork. These are two values that he has stressed to youths of my age.”

Over the past ten years, the mandir has welcomed people from all walks of life, leaving a lasting impression in their lives.  Community members join in weekly events to practice spirituality and personal development while fostering a sense of unity and teamwork. Music, language, and spiritual enrichment classes actively instill Hindu values and culture in future generations of young people who will grow to lead in their communities.

Regular programs and events at the mandir provide an opportunity for community members to explore and practice Hindu traditions and faith. The mandir is also the site of various charitable initiatives that include health fairs, blood drives, and community walkathons for people of all ages – merging the spirit of service with volunteerism. 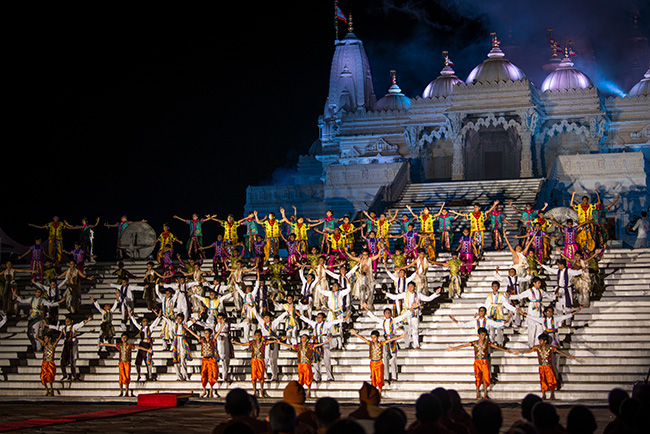 The BAPS Mandir in Atlanta unites families in spirituality, setting the tone for the anniversary events. Highlights from the program included video footage of the inaugural ceremonies and colorful cultural dances. Guests relived the past ten years of the mandir’s history, the development of youth activities, and the installation of the sacred image of Nilkanth Varni. Devotees shared stories of reaching milestones in their spirituality, growing closer to one another, and practicing peaceful living – all inspired and guided by the role of mandir in their lives.

The event was attended by several community and government officials who recalled fond moments with Pramukh Swami Maharaj and shared heartfelt reflections on their first meeting with Mahant Swami Maharaj during his current travels. The mayor of Lilburn, Mayor Johnny Crist, presented Mahant Swami Maharaj with a key to the city while saying, “Most cities in the state of Georgia want to be a place where you live, work, and play. But may I offer another alternative, or add to it, and that is we need to be a city where that is a place to live, to work, to play, and to pray.” Mayor Crist also brought a proclamation designating July 1, 2017 as Mahant Swami Maharaj Day in the city of Lilburn. In addition to Lilburn there are a total of six cities recognizing July 1, 2017 as Mahant Swami Maharaj Day including Matthews, NC; Boynton Beach, FL; Montgomery, AL; Knox County, TN; and Anderson, SC.
Georgia’s Secretary of State, Mr. Brian Kemp, conferred an Honorary Citizenship of Georgia to His Holiness Mahant Swami Maharaj. The honorable Mr. Nagesh Singh, the Consul General of India, was also in attendance and conveyed a hearty welcome on behalf of the Government of India. 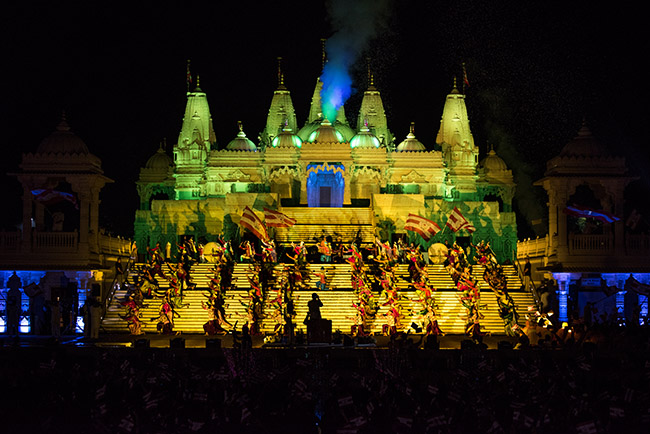 The celebrations concluded with blessings from Mahant Swami Maharaj who encouraged all to uphold unity, maintain faith, and further develop one’s spirituality in strengthening the mandir as a community place of worship.