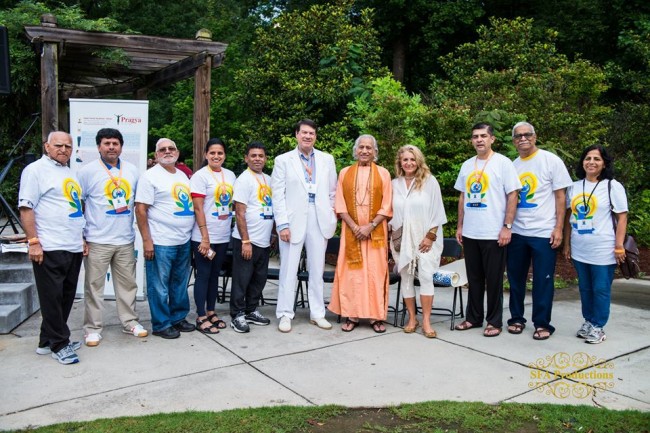 BY MAHADEV DESAI
Photos by ByteGraph Creations and SFA Productions

Atlanta, GA: On a cool breezy Sunday morning, June 25, 2017, the Consulate General of India in Atlanta in collaboration with the City of Sandy Springs and 50 plus community organizations celebrated the 3rd International Day of Yoga 2017 (IDY 2017) at the Heritage Park, Sandy Springs, from 7.30 a.m. to 10.30 a.m.  Consul D.V. Singh, (Head of Chancery),CGI, Atlanta,  Mayor Rusty Paul of Sandy Springs City Council,  Gurudev Amrit Desai of AmritYoga and  Shri Saumitra Gokhale, Global Coordinator, Hindu Swayamsevak Sangh, USA, graced and inaugurated the event, which was attended by over 700 yoga practitioners from all walks of life.

The event was inaugurated by the traditional lighting of the diya (lamp) by Consul Singh, with Mayor Paul and Yogi Desai. 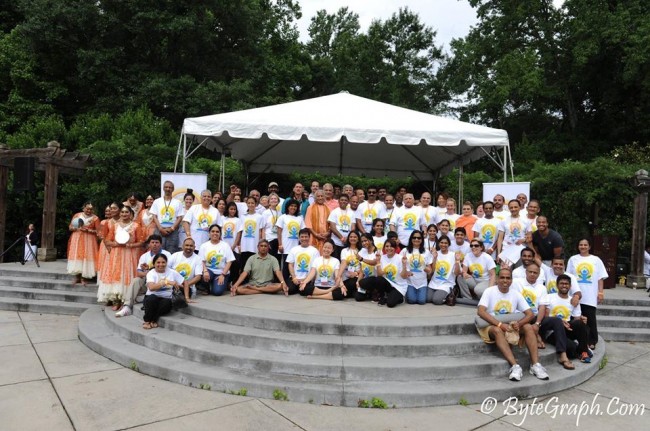 Consul Singh warmly welcomed all and in his brief remarks highlighted the importance of yoga and acceptability of yoga across the globe. Yoga creates an environment for universal peace, brother-hood, harmony and well-being, he said. Mayor Paul also addressed the participants: “It is a privilege to welcome Yoga Day participants to Sandy Springs for a third year. Our city is home to a culturally diverse collection of people, many of whom we see gathered here at Heritage. I want to thank the Indian Consulate for their hospitality in bringing such a welcoming event to our community,” he said.

There has been a worldwide upsurge of interest in yoga and meditation. Around 300 million people are practicing yoga asanas; pranayama, meditation etc. worldwide including one hundred million in India. The United Nations General Assembly has declared June 21 as the International Day of Yoga, following Indian Prime Minister Narendra Modi’s address to UN General Assembly on September 27, 2014 wherein he stated: “Yoga is an invaluable gift of India’s ancient tradition. It embodies unity of mind and body; thought and action; restraint and fulfillment; harmony between man and nature; a holistic approach to health and well-being. It is not about exercise but to discover the sense of oneness with yourself, the world and the nature. ” The International Day of Yoga is celebrated annually the world over by India Consulates in collaboration with other Organizations. 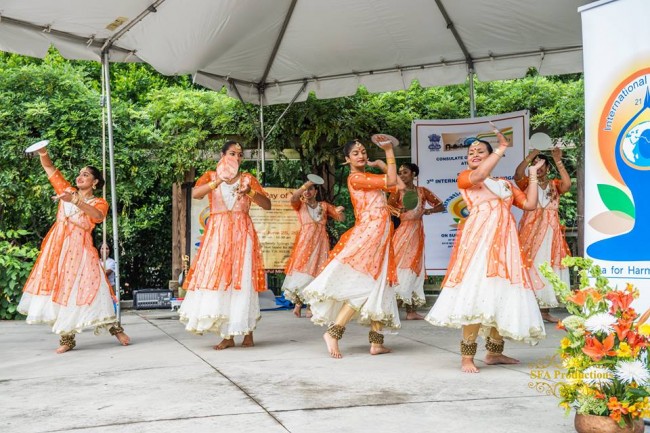 The enthusiastic and cheerful attendees rolled out their yoga mats and after invocation, joined in performing the Common Yoga Protocol followed at the IDY. Led by a few seasoned yoga volunteers, they did warm up practices, standing & sitting asanas (postures); Sitting, Prone, Supine asanas (postures); Kapala Bhati & Pranayama (Breath altering practices); Dhyana (Meditation) and Sankalpa (Commitment to the truth).This was followed with Yoga Namaskar; Hatha Yoga; Surya Namaskar; guided meditation and songs and dances for peace.

Students of Nritya Natya Kala Bharti Dance and Music Academy presented a scintillating kathak fusion item, choreographed by assistant director Samta Savla, which signified the strength and importance of the sun to yoga and dance.

The program concluded with the closing invocation.

The event was supported by sponsors and voluntary contributions by various business and professional entities including Kroger, Austell International Farmers Market, Suvidha and SIMSAM LLC. 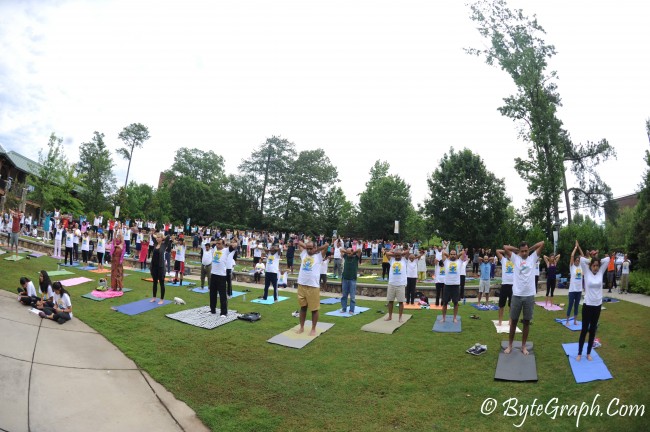 The following organizations put their booths – Sewa, HSS, Amrit Yoga, Sahaj Yoga, Isha Yoga, Art of Living, Heartfulness Meditation and Raksha along with lot of individuals. The event gave a big opportunity for sponsors and organizers to share their offerings with the yoga enthusiasts.

More than 100 volunteers put enormous efforts to make this program a grand success. Very effective use of social media was made to publicize the IDY and also to exhort the community to attend it. The India Consulate, Atlanta and  Sudhir Agarwal, Rajan Vedak, Ajay Houde, Rajeev Menon and Jaideep, to mention a few, did a commendable job in ensuring a flawless and memorable celebration of the 3rd IDY.