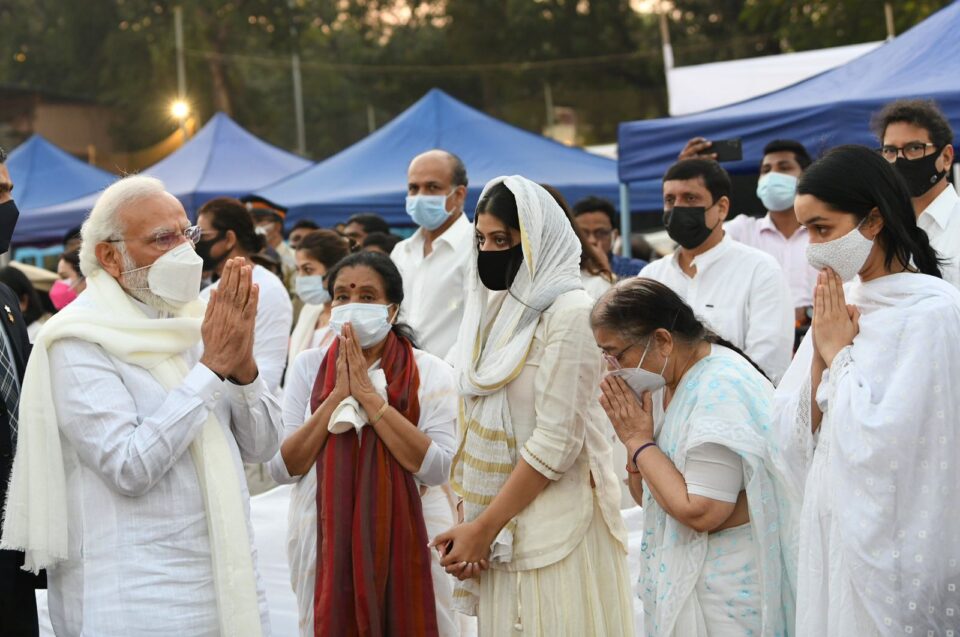 Prime Minister Narendra Modi on Sunday evening paid his respects to the mortal remains of legendary singer Bharat Ratna Lata Mangeshkar, whom he referred to as his ‘Badi Didi’ (elder sister).

Modi was among the first of VVIPs who went to the spot where Lata’s body was kept for people to pay their last respects at Shivaji Park.

He was accompanied by Governor Bhagat Singh Koshyari, Chief Minister Uddhav Thackeray, and other dignitaries like Deputy CM Ajit Pawar and Union Minister Piyush Goyal, many of whom enjoyed family relations with the Mangeshkars.

The PM then got down and walked over to the enclosure where the entire Mangeshkar clan including Lata’s sisters Asha Bhosale, Usha Mangeshkar, Meena Mangeshkar and sole brother Hridaynath Mangeshkar as well as grandchildren and other family members were present and offered his condolences to them.

After interacting briefly, Modi patted Uddhav Thackeray warmly, signifying he should take care of his health – as the CM has been suffering from a chronic spinal issue since the past three months.

Bharat Ratna Sachin Tendulkar – who had very close ties with the Bharat Ratna Lata – also turned up with his wife Dr Anjali and paid his last respects to the deceased singer.

Mumbai, February 6, 2022: The final journey for Bharat Ratna Lata Mangeshkar – who passed into immortality this morning – started from her Prabhukunj home on Pedder Road in south Mumbai to Shivaji Park, where she will be accorded a rare public funeral with full state honours on Sunday evening.

Her mortal remains were brought home around noon and kept for ‘darshan’ for a couple of hours with hordes of Bollywood personalities, top politicians across party lines, and other celebs trooping for a last glimpse and to offer solace to her siblings and other family members.

Later, a flower-bedecked army truck arrived to the building compound, her body draped in the Indian Tricolour was brought down and kept there as the Mumbai Police band played soulful tunes.

A police contingent fired a 21-gun salute and the body was placed atop the truck which started on a slow 10-km drive to Shivaji Park where all preparations are made for the public funeral.

The Maharashtra Government has declared a 3-day State Mourning and Monday (Feb 7) as a public holiday as a mark of respect to the legend.

Thousands of teary-eyed people lined up the 10-km long route from Pedder Road to Shivaji Park, with several VVIPs like Minister Aditya Thackeray and Leader of Opposition Devendra Fadnavis, Municipal Commissioner I.S. Chahal and others joined the procession on foot.

As the procession continued, many hundreds joined en route, many raising cries of “Lata Didi, Amar Rahe”, “Lata Didi Zindabad”, carrying her photos or playing her immortal numbers, and thousands more stood in the balconies of their homes in small or tall buildings, raising their hands in an adieu.

Amid tight security in and around at Shivaji Park, a specially-erected funeral pyre was ready for the last rites, with a host of top leaders and celebs in attendance.

Lata Didi, as she was revered in all circles, had been battling with several ailments complicated by a Covid-19 infection and was admitted to Breach Candy Hospital on Jan 9.

After a long and valiant battle, India’s Melody Queen quietly fell silent at 8.12 a.m. on Sunday, stunning the nation and the world of music.

Scores of Bollywood personalities like Amitabh Bachan, Saira Bano, the Kapoors, singers Sudesh Wadkar, Anuradha Paudwal, Sonu Nigam, Udit Narayan, music directors, film producers-directors and others either visited the Mangeshkar residence or paid tributes to her memory, while others are likely to attend the funeral at Shivaji Park.

The entire Maharashtra cabinet, top leaders of Shiv Sena, NCP, Congress, MPs, MLAs, municipal corporators and others started gathering at the venue for the last rites as several thousands of people also turned up to witness Lata’s final departure.

This is the first such event in a decade after the late Shiv Sena patriarch Balasaheb Thackeray passed away on Nov 17, 2012, as he was accorded a public funeral the next day (Nov 18, 2012), at Shivaji Park. (IANS)