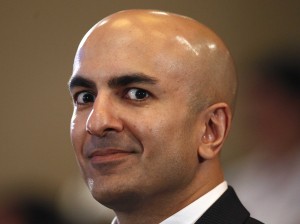 Washington, April 4 (IANS) Indian-American Neel Kashkari is seeking to emulate his one time boss, former Republican President George Bush, as he mounts a long shot bid to challenge California’s Democratic governor Jerry Brown.
It was to Bush he turned for advice when in late 2012, Kashkari first pondered the idea of jumping into the governor’s race, according to CNN.
For Bush was an underdog when he tried to unseat Texas Governor Ann Richards in 1994, and he ended up winning in that year’s Republican landslide,
Bush who went on to win the presidency six years later had in 2008 also entrusted to Kashkari as a treasury department official the crucial job of administering the $700 billion Wall Street bailout at the height of the global financial crisis.
He asked Bush why he had the confidence to run against the tough-to-beat Richards.
“He said, ‘The facts were on our side.’ He thought that she was light on the subject of issues. He was going to focus on the real issues facing Texas as the time,” Kashkari recalled in an interview with CNN.
CNN said “barely anyone believes Kashkari can win in the Democratic state, even in a midterm year that looks more and more hostile toward Democrats.”
Kashkari himself expresses some honest skepticism about the enterprise, it said noting he recently compared himself to a smurf, and Brown to the evil wizard Gargamel.
After announcing his campaign in January, Kashkari is polling at a paltry 2 percent.
Not only is he trailing Brown by 45 points, but he’s also trailing Tim Donnelly, a tea party Republican who was once a member of the Minuteman movement, by 7 points.
In California’s nonpartisan primary system, the top two finishers square off in the general election.
Kashkari, 40, a son of Indian immigrants with a degree from Wharton told CNN: “I play to win at everything I do.”
“I always talk about having two goals. Goal number one is to win. Goal number two is help rebuild the Republican Party in a positive, inclusive direction,” he was quoted as saying.
The simple theme of Kashkari’s campaign is typed out on his Twitter bio. “Jobs and Education. That’s it! I’m Neel Kashkari and I’m running for Governor of California.”
Kashkari has raised $1.3 million since joining the race in January, CNN said. But his opponent Brown is sitting on $20 million.
“We’ve got to do this on the cheap, so we’re looking at a lot of different ways of reaching our audience,” Kashkari said, plugging his digital operation.
Kashkari and his advisers have been upfront about the fact that win or lose, he is running, in part, to help repair the party’s tarnished image among young people and minorities, according to CNN.
“I think my candidacy is viable in California, but I recognize this is not a model that, today, would play nationally,” he said.
We’re trying something in California, and I’m hoping that we can show that California can lead the country in a positive way by showing there’s an interesting new profile of a young Republican leader,” Kashkari was quoted as saying.