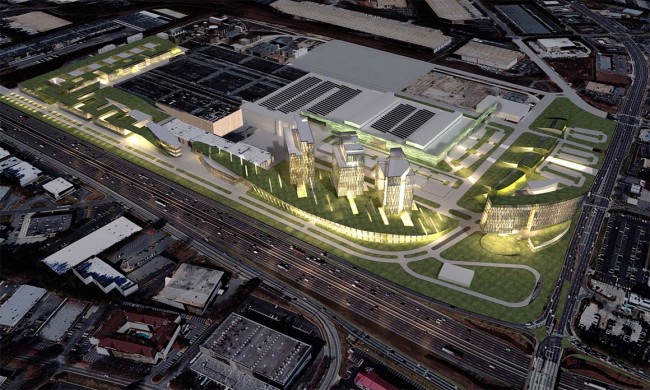 Atlanta, GA, Aug 25: A film and television media complex, billed as the largest outside of California, is coming up opposite the Global Mall at the intersection of Jimmy Carter Boulevard and I-85 in Norcross, Georgia. Atlanta Media Campus will include media production studios, emerging media and high tech office space, higher ed and research facilities, multifamily and student housing, supportive retail and an on-site hotel.

Jacoby Development has been a pioneer in projects such as Atlantic Station, Aerotropolis Atlanta (the redevelopment of a former Ford assembly plant into Porsche North America’s headquarters), and ONE Daytona (a mixed use development in partnership with International Speedway Corporation).

“We are fortunate to be teaming with one of the most experienced owners and managers of independent studios and accompanying production service providers in the country,” said Jacoby Development Chairman Jim Jacoby. “MBS brings valuable expertise and extensive industry relationships and connections that promise to continue to attract major film productions to the Atlanta Media Campus and Studios.”

“We are confident that MBS3 will provide Atlanta Media Campus with the resources it needs to successfully attract major entertainment properties toGeorgia,” says MBS3 President Richard Nelson. “We are also pleased to be making a substantial investment inGeorgia’s film industry infrastructure with state of the art lighting and grip equipment.”

A recent economic study indicates as many as 2,300 direct jobs will be created at Atlanta Media Campus, which will feature six state of the art sound stages totaling 115,000 square feet, over 75,000 square feet of acoustically treated large scale production space, another 100,000 square feet in production offices and 110,000 square feet in dedicated workshops and service provider space. It will also include more than 30 acres of paved backlot. The 114-acre mixed-use development will also include 300 hotel rooms, a film school, student housing, multifamily housing, office space and complementary retail uses. The redevelopment site is located in the Gwinnett Village CID at the OFS optical fiber manufacturing site in Norcross, formerly known as the Western Electric/AT&T/Lucent facility.  OFS will continue its operations on the remaining 66 acres.

“In keeping with our company’s development philosophy,” Jacoby says, “we intend to build a green and sustainable studio including solar power, a chilled water plant, and a recycling program for used sets. Most importantly, rather than developing buildings from the ground up, we are up-cycling the existing obsolete buildings for studio, production, office and mill space.”