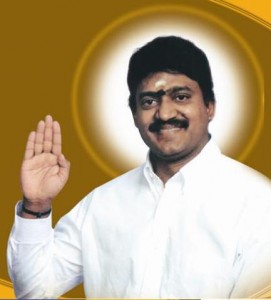 “This defendant traded on his perceived religious authority and spiritual powers to cheat the faithful who believed in him,” said United States Attorney Sally Quillian Yates.  “The jury saw through his deception, and he is being held accountable for his fraud.”

“Annamalai Annamalai clearly took advantage of his religious standing in the community as well as the individuals who respected and revered him” stated Veronica F. Hyman-Pillot, Special Agent in Charge, IRS-Criminal Investigation. He used deceit and fraud, to circumvent the bankruptcy courts and to collect money for his own personal benefit. Today’s verdict should send a strong message that this will not be tolerated.”

According to United States Attorney Yates, the indictment, and other information presented in court:  Annamalai generated income through the Hindu Temple of Georgia (“the Hindu Temple”) by charging fees to his followers in exchange for providing spiritual or related services.   In a typical transaction, a follower agreed to purchase a particular service for a communicated price, and provided a credit card number by telephone to guarantee payment.  Annamalai caused the followers’ credit card numbers to be charged on multiple occasions, in excess of the agreed amount and without authorization.  If the followers disputed the charges with their respective credit card companies, Annamalai submitted false documentation to the credit card companies in support of the unauthorized charges, which formed the basis for his conviction on bank fraud charges.

The income generated by the Hindu Temple through these credit card charges was used to fund the personal lifestyle of Annamalai and his family, who owned or controlled numerous homes and real properties, luxury vehicles, and foreign bank accounts in India.  Annamalai was convicted of willfully filing a false tax return for the 2007 year, for failing to disclose his financial interest in foreign bank accounts held in India.

Annamalai was also convicted of bankruptcy fraud offenses in connection with the Hindu Temple’s petition for bankruptcy protection in August 2009.  Annamalai concealed assets from creditors and others by diverting credit card receipts and donations intended for the Hindu Temple to a bank account in the name of a different entity.  Annamalai was also convicted of money laundering for using proceeds from the bankruptcy fraud to pay mortgages on properties that he owned, and payments to himself.

Finally, Annamalai was convicted of conspiring with his spouse and co-defendant, Parvathi Sivanadiyan, and others to conceal the arrest of co-defendant Kumar Chinnathambi.  Chinnathambi was later arrested and pled guilty to conspiracy to commit bankruptcy fraud on July 17, 2014.  He is scheduled to be sentenced on October 24, 2014, at 10 a.m. before District Court Judge Timothy C. Batten, Sr.  Sivanadiyan is awaiting trial.

This case is being investigated by Special Agents of the Internal Revenue Service Criminal Investigation, with valuable assistance from the Federal Bureau of Investigation.