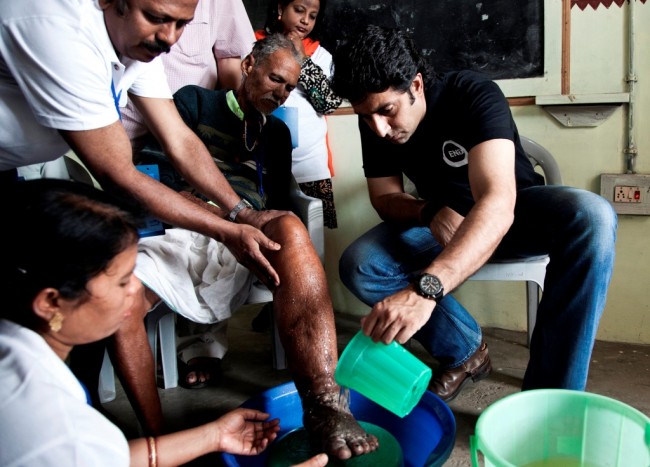 Washington, Aug 25 (IANS) Given Prime Minister Narendra Modi’s stress on “toilets not temples”, India has a historic opportunity to end Neglected Tropical Diseases (NTDs) that affect the world’s poorest people, according to an Indian-origin health specialist.

“India has an excellent history of controlling and eliminating smallpox, guinea worm and polio. Now we have this huge opportunity to end NTDs,” says Dr. Neeraj Mistry, Managing Director of Global Network for NTDs here.

“We are very positive because of India’s proven track record and the current scale of India’s treatment programme,” Mistry, a third generation South African of Gujarati origin, told IANS. Mistry joined the group in July 2010 as he was passionate about the issue.

“The other positive sign is the new administration’s commitment to the issue of sanitation and reducing open defecation,” he said. “India is also committed to the London declaration on ending NTDs by 2020.”

“In the Indian context, we feel that this is an achievable goal that will propel not only India but also the global response,” Mistry said as India accounts for 35 percent of the total global burden of NTDs.

Over 500 million Indians are at risk of the five main NTDs present in India – intestinal worms (roundworm, hookworm, and whipworm), elephantiasis (lymphatic filariasis) and trachoma.

Together with river blindness (onchocerciasis) and snail fever (schistosomiasis), these seven NTDs infect more than one in six people worldwide and cause blindness, massive swelling in appendages and limbs, disfigurement, severe malnutrition and anaemia.

Living in rural areas predisposes over 70 percent Indians to get these infections and trapping them in poverty with coastal areas the most vulnerable.

Up north, Bihar, Jharkhand, Orissa and West Bengal and in the South Tamil Nadu and Kerala also have higher rates of elephantiasis.

In India, working hand in hand with the government, Mistry’s Network runs a very local customised END7 awareness campaign to end these diseases, mainly led by a lot of private sector Indian companies.

As pills are donated by pharmaceutical companies and existing infrastructure is used, it costs only 50 cents (31 rupees) to treat and protect one person for an entire year against all the seven NTDs.

With the new government’s commitment to sanitation, there is a huge move to reduce open defecation in India as that’s the key to controlling these infectious diseases.

Because these parasites are in the intestines, it comes out in urine and faeces and gets back into the soil or water and when people walk barefoot or children don’t wash their hands, it infects new individuals or even re-infects individuals who have been treated.

Thus “reducing open defecation together with providing treatment is what’s going to turn this around,” Mistry said.

“In addition to providing the facilities and figuring out what the infrastructure needs are, at the end of the day, the success of all these public health programmes depends on what we call behaviour change or shifting the culture to take up these services,” he said.

“Social change is actually the hard part of it,” he said. “It’s the type of cultural shift that comes from what we see from religious leaders and popular social figures.”

A physician can treat a body, but one needs to get into the hearts and minds of people to effect behavioural change, Mistry said.

That’s why last February Bollywood superstar Abhishek Bachchan was roped in as the first official END7 campaign ambassador in India to help raise awareness of NTDs.

Like his father Amitabh Bachchan’s role in the polio campaign, Abhishek Bachchan’s recent trip to an interior area of Orissa, about an hour’s drive from Bhubaneswar, had a “very very huge” impact on NTD treatment programme.

His being actually involved in washing the feet of women infected with elephantiasis also helped reduce the stigma and misperceptions related to this.

“Now India has done an excellent job in creating policies at the federal level and currently runs some of the largest NTD control and elimination programmes in the world, reaching some 400 million people,” Mistry said.

“And we are optimistic that with the new policies and commitment – sanitation together with established programmes for deworming and elephantiasis – India can notch up another success story in controlling infectious diseases,” he said.