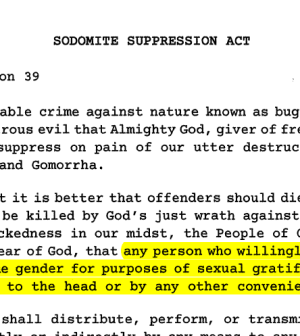 Washington, March 27 (IANS) California’ Indian-American Attorney General Kamala Harris has asked a state court to allow her to block a planned controversial move to put before voters a measure authorizing the killing of gays and lesbians.

Calling the proposed “Sodomite Suppression Act” patently unconstitutional and utterly reprehensible, Harris filed a request with the Superior Court in Sacramento Wednesday, according to the Sacramento Bee.

Harris, the state’s first Indian-American and first African American top law officer, has also asked to be relieved of her ministerial duty to prepare a title and summary for the measure before it advances to the signature-gathering stage.

Harris, 50, who had in January thrown her hat into the ring for the 2016 Senate race argued that readying it for circulation would waste state resources, generate unnecessary divisions and mislead the public.

“This is not about whether we like something or not, or whether we simply find it offensive or troubling,” she told the Bee.
“In this case, we are talking about a proposal that literally is calling for violence. It’s calling for vigilantism,” she said.

“It’s calling for the public to be able to shoot in the head a member of the LGBT community.”

California is one of 21 states where citizens can petition to have laws put on the ballot through the gathering of voter signatures. Huntington Beach attorney Matt McLaughlin paid $200 to file the measure.

It refers to “sodomy” as “a monstrous evil” and specifies that anyone who touches another person of the same gender for sexual gratification be put to death by “bullets to the head” or “any other convenient method.”

McLaughlin’s initiative also requires that anyone who transmits “sodomistic propaganda” to a minor be fined $1 million per offense, imprisoned up to 10 years, or expelled from the state.

Should the measure be cleared for circulation, McLaughlin would have 180 days to collect the 365,880 signatures needed to put the measure on the ballot in November 2016.

Meanwhile, Charlotte Laws, an author and talk show host, submitted along with her own $200 cheque the proposed “Intolerant Jackass Act.”

It would label anyone seeking the killing of gays and lesbians an “intolerant jackass,” and require them to attend at least 36 hours of sensitivity training over one year and to contribute $5,000 to a pro-gay or pro-lesbian organization.