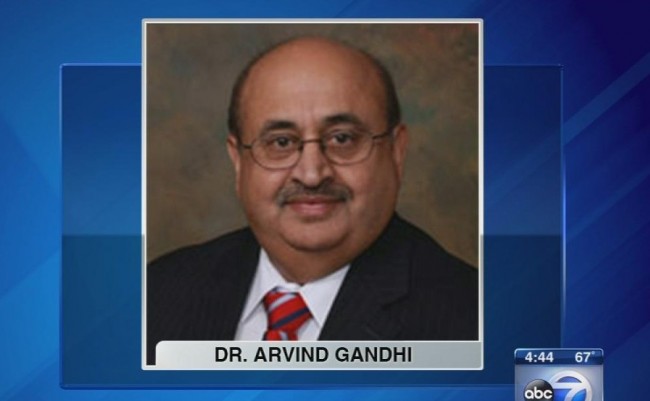 Washington, Oct 18 (IANS) As many as 293 patients of an Indian-American cardiologist around a small town in Indiana have filed lawsuits against him and two other doctors in his practice claiming that they performed needless procedures.

The Indiana state Medicaid program has started an investigation against Munster, Indiana based Dr. Arvind Gandhi and his partners, Dr. Wail Asfour and Dr. Satyaprakash Makam, according to the New York Times.

The three doctors received nearly $5 million in combined Medicare payments in 2012, making them the three most reimbursed cardiologists in Indiana, it said.

The Times quoted one doctor not named in the litigation as saying he had received a subpoena from the US attorney’s office and provided the medical charts of several former patients of Dr. Gandhi and his colleagues that he has since treated.

Lawyers for Dr. Gandhi and his practice, Cardiology Associates of Northwest Indiana, said they had not received any subpoenas, and the doctors denied any wrongdoing.

The partners invested in real estate, including luxury apartments in Chicago, and a local restaurant, the Times said.

Besides the doctors, the malpractice lawsuits also name Community Hospital, where “Dr. Gandhi was a star”, through the foundation that oversees its operations, as a defendant, the daily said.

Dr. Gandhi was a high-ranking member of the medical staff at the hospital, and the lawsuits charge that the superfluous procedures were done “with the authority and consent” of Community Hospital, it said. Lawyers for the hospital deny any wrongdoing.

Lawyers for Dr. Gandhi, his practice and the hospital, say the lawsuits are without merit. The legal actions, they say, are being driven by envious physicians eager to take patients from Dr. Gandhi and by greedy lawyers seeking a big settlement.

A whistle-blower lawsuit brought by a physician and a hospital employee against the hospital, Dr. Gandhi and his practice in 2008 raised similar accusations that the hospital had billed for unnecessary defibrillator and pacemaker implantations that were performed by doctors without the proper credentials to implant the devices.

But the suit, eventually joined by the US attorney’s office in Hammond, Indiana, just north of Munster, was settled without anyone admitting wrongdoing. The hospital paid a $48,942 settlement.

The hospital and the doctors say that the settlement shows that the issues have been investigated and that they have been absolved of many of the same allegations contained in the current malpractice suits, the Times said.

The Problem with Standardized Tests

Indian govt advises students in US universities to stay back