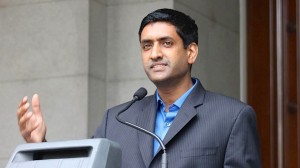 Ro Khanna was cleared of any wrong doing.

Washington, March 29 (IANS) A California judge has disqualified an Indian-American Republican candidate from a Congressional race to challenge Democratic Congressman Mike Honda, but cleared another Indian-American of any wrong doing.

The Sacramento county Superior Court judge found irregularities in Republican Vinesh Singh Rathore’s nominating petition, but did not find that any responsibility lay with Democratic challenger Ro Khanna, as a lawsuit had claimed, according to San Jose Mercury News.

Ro Khanna, a former Obama administration official who served as the deputy assistant secretary in the commerce department, has mounted a campaign to unseat seven-term incumbent Honda to represent the 17th Congressional district — the first majority Asian-American district in the heart of Silicon Valley.

“There was never evidence to support the ridiculous claim and it was dismissed by the judge who examined it,” Khanna campaign manager Leah Cowan was quoted as saying by Mercury News.

“It’s obvious that the defenders of the status quo feel threatened by the momentum behind Ro’s change campaign and now they’ve resorted to old-style political attacks and dirty tricks.”

“The well-funded Khanna has been campaigning for about a year, but the entry of Republican Vanila Singh at the start of this year and the entries of Rathore and Joel Vanlandingham this month threw the race’s electoral calculus into a tailspin,” the Mercury News said.

Jeffrey Wald of Fremont, an Alameda county Republican Central Committee member, had sued the voter registrars in Alameda and Santa Clara counties as well as the Secretary of State’s Office, arguing that Rathore and Vanlandingham should be kicked off the ballot.

“Khanna recruited candidates to enter the race as Republicans to split the Republican vote three ways, effectively diluting votes that would otherwise be cast in favour of (Vanila) Singh,” the suit as cited by Mercury News claimed.

Judge Sumner, who heard the case Wednesday, found Rathore did not meet the 40-signature minimum and thus could not appear on the ballot, the Mercury News said, citing one of Wald’s attorneys.

However, Rathore, 35, a Google product attorney, insisted Thursday that all those who signed his nomination papers were legitimate voters.

“Judge Sumner ruled to remove me from the ballot because there were instances where a husband filled out his wife’s name and address on the nomination papers (though both signed on their own behalf),” he said in an e-mail to Mercury News.