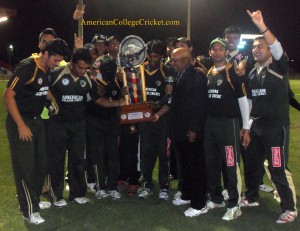 Washington, March 29 (IANS) The University of South Florida (USF) cricket team, made up of all but one players from India, has won this year’s American College Cricket (ACC) championship as the sub-continent’s favourite game finally “arrived” in America.

One sure sign that cricket has arrived in this land of baseball, basketball and football was the fact that the 2014 ACC National Championship was the first ever cricket game played on American soil to be telecast live on ESPN, according to USF News.

The rising popularity of cricket on American campuses is also evident from the fact that 25 teams participated in the 2014 tournament, while there were only six teams in the first ACC tournament in 2009.

Not surprisingly, the teams are dotted with players from the Indian subcontinent. The lone non-Indian player on the winning USF team is from Pakistan. Interestingly, half the team members are from Hyderabad.

At the final, played at Fort Lauderdale in Florida in the T-20 format, USF defeated the Auburn University Cricket Club, which too had several Indian players, USF News said.

Apart from picking up the Chanderpaul Trophy, USF also won several other honours: Sai Ramesh (from Chennai) was declared the Most Valuable Player (MVP) as well as the Best Player of the tournament; Karthik Achanta (from Hyderabad) was the MVP of the finals.

USF has reached the finals thrice before – and finally tasted success this year.

“We were desperate to put up a show and win for the supporters who were cheering for us on TV, in the stadium and, most importantly, for USF,” said team member Vishwaksena Reddy Vuppunutula, who is pursuing his Master’s in engineering management.

He admits that one reason he chose USF was “its strong cricket reputation”.

USF is one of the pioneering five colleges that launched the ACC in 2009. The others are Boston University, Montgomery College, Carnegie Mellon and University of Miami, according to ACC website.