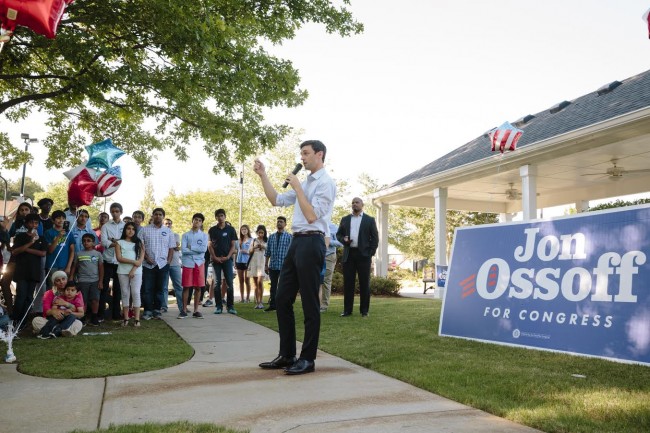 Atlanta, GA, May 25, 2017: Jon Ossoff says his campaign is not about him. It’s a grassroots movement led by women in metro Atlanta, where people are coming together to fight for issues that matter most to residents of Georgia’s 6th congressional district.

Indeed. In the increasingly diverse suburbs of this district, Indian-Americans are among those waking up to political activism. But the movement is much larger than the 30-year-old documentary film-maker and former Congressional aide admits. The June 20 run-off between him and Republican opponent Karen Handel is in the national spotlight as a referendum on Trump. Flipping a traditionally red district will be a gauge of Trump’s troubles and a victory for the nationwide resistance against his policies. It could also be a sign of what’s to come in the 2018 mid-term elections.

In this interview with NRI Pulse, Ossoff talks about his reasons for running, his legislative priorities and his promise to build bridges between the diverse communities that make America great.

What are some of the legislative priorities you hope to work on once elected?
I’m running for Congress because I believe we all have to stand up, right now, and fight for progress — for our prosperity and health, our civil rights and civil liberties, and our security. I will prioritize high-tech and bio-tech research and innovation that will create quality jobs, grow the economy, and turn metro Atlanta into the Silicon Valley of the South. I will also work to hold Washington accountable by trimming duplicative government programs, saving taxpayers $16 billion immediately, and as much as $600 billion over the next ten years.

Apart from the Trump administration’s crackdown on immigrants, there is growing uncertainty about the H-1B visa program, which is very popular among Indian techies. What is your stand on the issue of legal immigration and the H-1B visa in particular?
My mother is an immigrant who became a small business owner, an American citizen, and a champion for women’s rights. We should welcome those who, like our own forebears, seek the opportunity to work hard, play by the rules, and build better lives in America. I want America, and Atlanta, to be a destination for those who are innovating, creating jobs, and driving our economy forward.

There has been a spate of hate crimes targeting Indians (among other minorities). In Kansas earlier this year, a man shot two Indian men at a restaurant, killing one of them. The attacker yelled, “get out of my country” and “terrorist” before firing. In March, a 39-year-old Sikh man in Washington, also heard a similar cry- “go back to your own country”- before he was shot in the arm. How do we deal with the climate of hostility in the country?
The attacks that you referenced are abhorrent and disturbing. As a representative in Congress, I will fight tirelessly against discrimination, hate speech, or violence against Americans on the basis of their race, religion, gender, sexual orientation, or place of birth. We should be building bridges between the diverse communities that make America great, that’s why I am working hard to reach out to all communities here in Metro Atlanta, and earn the support of all residents of the Sixth Congressional District.

Recently, Georgia Governor Nathan Deal signed a bill that will allow Georgia weapons permit holders over 21 years of age to carry concealed firearms in most parts of the state’s college and university campuses. Is this a bad idea? Why?
I grew up with guns in the house and was taught by my father how to use them safely. I believes that the campus carry measure signed into law by Gov. Deal is dangerous and puts our bright young people on college campuses at risk. This campus carry measure was opposed by parents and campus law enforcement officers, but Karen Handel chose to support it, putting her agenda over the safety of Georgia’s students.

One of your campaign promises is to grow metro Atlanta’s economy into “the Silicon Valley of the South.” How do you propose to achieve this?
I will work to prioritize high-tech and bio-tech research and innovation that creates quality jobs right here in metro Atlanta, which can be filled by the talented young people who graduate from our universities and tech schools. I will also stand up in Congress for a dynamic, forward-looking, fiscally responsible economic policy that maximizes opportunity for entrepreneurs, workers, and investors, and work to level the playing field for small businesses so they can grow and create jobs that will empower Georgians to strive, save, send our kids to college affordably, and retire comfortably.

The cost of today’s college education can be daunting and worrisome for students and their families. How important is it to make college education more affordable so that students can achieve their best potential?
I will work to reduce the burden of student debt by working to make college more affordable, and by working to keep interest rates on student loans at a manageable level. Student debt shouldn’t prevent young Americans from saving, investing in their careers, and reaching their potential.

A federal judge recently ordered Georgia to temporarily reopen voter registration ahead of the runoff. What is your campaign doing to motivate youngsters to register?
We are reaching out to eligible voters across the Sixth Congressional District through a robust grassroots campaign. We just opened a new campaign office in Johns Creek, our campaign’s sixth office in the Sixth Congressional District, and in all six of our offices you will find local young people actively volunteering, and even interning with our campaign, encouraging their friends and neighbors to make their voices heard in this election. We are going to be knocking on doors every day until June 20th, working to get out the vote, and all supporters are welcome to join us!

What does the average voter in the 6th district care about? How do you connect with the average voter?
I am focused on the issues that matter most to the residents of the Sixth Congressional District: creating quality jobs in metro Atlanta, growing the economy, trimming government waste, and ensuring access to quality, affordable healthcare. But this campaign is not about me, it’s about a grassroots movement, one that is led by women right here in metro. In this grassroots movement, people are coming together to fight for the issues that matter most to residents of the Sixth, and I’m just glad that my campaign can be a part of it.

From social media groups to grassroots volunteering- Indian-Americans who have never been politically inclined before are among those who are coming out to support your campaign. What do you know about these people and their cultures?
I am proud to have the support of people who have not previously been engaged with the political process. People from across the Sixth District, including many Indian-Americans, are joining this campaign to stand up for civil rights, for quality and affordable healthcare, and for good jobs and a strong economy here in Metro Atlanta. I am honored to have their support.

Why should the Indian-American community in the 6th district vote for you?
I will work to improve the economy and to create good jobs here in metro Atlanta. I will fight for quality, affordable healthcare, and work to make college more affordable. If I am elected, the voices of Indian-Americans, and all Americans, will ring out in the halls of Congress. I was born and raised in Georgia and grew up here in the Sixth District. Today, I lead a company that investigates corrupt politicians and organized crime, and I previously spent five years as a Congressional aide, learning how to get things done in Washington. I’ve learned how to expose and fight the abuse of power, and I will use my experience and all of my energy to fight for Georgia.