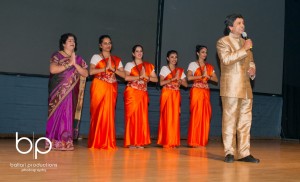 Atlanta, GA: Sewa USA, Atlanta chapter, presented Manick Sorcar’s full-length, one-of-its-kind laser show titled ‘Swamiji’ on the life and contributions of Swami Vivekananda, at the Rialto Center in Atlanta on September 28. The 90-minute,  visually stunning, extraordinary play of light, animation and sound was created exclusively for SEWA, and is Sorcar’s creative contribution to the ongoing 150th birth celebrations of the Hindu monk, who introduced the Indian philosophies of Vedanta and yoga to the western world. 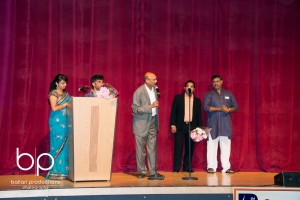 The laser documentary started with a Sanskrit prayer to the Holy Trio, followed by ‘vandana’, a live group-dance set to a Swami Vivekananda composition, and made enchanting with laser effects. This was followed by the laser documentary which followed the monk’s birth in an aristocratic Bengali family, his childhood, his spiritual apprenticeship with guru Ramakrishna, his travels across India, his visits to the West, and the impact of his philosophies there. The highlight of the show was his address at the Parliament of the World’s Religions in Chicago, where he introduced Hinduism to America and called for religious tolerance and an end to fanaticism, and received a two-minute standing ovation from the crowd of 7000.

The show’s creator Manick Sorcar thanked Sewa for giving him the opportunity to take his show on a tour of 16 cities across the US. “This gives me the opportunity to spread Swamiji’s message of religious tolerance and brotherly love,” he said. After the show, Sorcar narrated how a visit with his wife in 2006 to the Art institute in Chicago, the very spot in Chicago where Swami Vivekananda gave his famous speech, gave birth to the idea of a laser documentary on the monk.

Sorcar’s animation videos have won top awards at international film festivals, and are regularly telecast on PBS channels. An author of several lighting design texts, by day he is the full time CEO/President of Sorcar Engineering, Inc., which is responsible for the lighting design of palaces in Saudi Arabia, sport centers in Japan, DIA concourses, and the Colorado Convention Center expansion.

“Between my work as an electrical engineer, my business, and my magic & laser shows, it took me six years to complete the project,” he said, adding, “But Swami Vivekananda’s quote, ‘Arise, awake, stop not until your goal is achieved’ kept me going.”

The evening began with chief guests Shiv Aggarwal and Pratap Singh Chauhan lighting the traditional lamp. In his brief address, Aggawal, stressed on the virtues of serving society. “God remembers those who do sewa,” he said, adding “We must support Sewa volunteers who are doing a great job.”

Subash Razdan, in his address, applauded the “true service and commitment” of Sewa volunteers. He also recounted his unique experience of being at the Vivekananda Rock Memorial in Kanyakumari and witnessing sunrise on January 12, the very day that Swami Vivekananda was born, 150 years ago.

Youth volunteers Varun Ballari and Sahaana Sundar were felicitated. Ballari was the organizer of the first ever Sewa 5K Run earlier this year. Sundar was acknowledged for her leadership skills during this year’s Sewa Get Inspired (summer internship) program where high school and college students volunteer for the Bhutanese community in running SAT classes/ arts and craft projects and fund raisers.

Geetika Jape and Varun Ballari were the hosts for the evening.

Baba Ramdev Urges Indian-Americans to Get into Politics