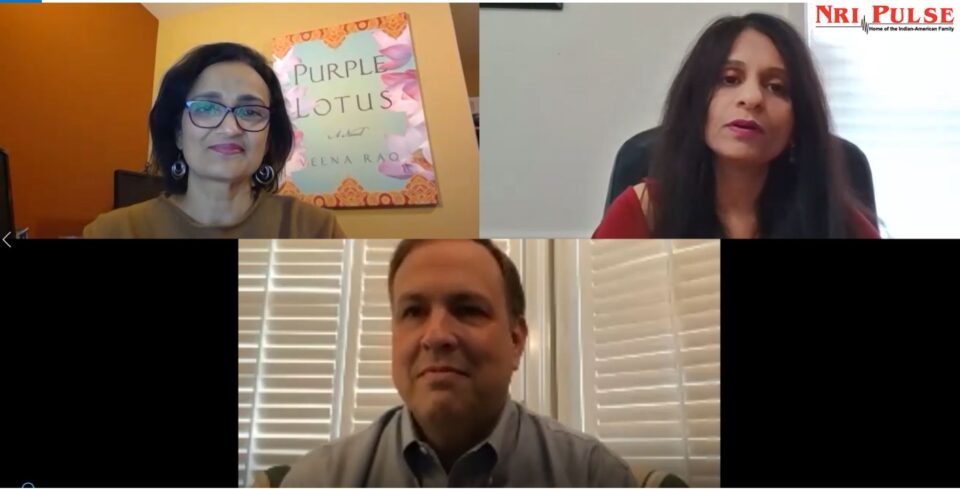 BY JYOTHSNA HEGDE
(With inputs by Veena Rao)

Johns Creek City Council member John Bradberry, who recently announced his candidacy for Mayor, is running under the banner “Forward Together!” In this exclusive with NRI Pulse, the councilman discussed his priorities if elected, and his vision for the city of Johns Creek.

Bradberry is a graduate of UGA with a BBA in Management Information Systems. He has a landscape design business. John is a former United States Marine and member of the Johns Creek Veterans Association. He serves on the board of One Johns Creek, a coalition dedicated to helping youth mental health and substance abuse. Bradberry resides in Johns Creek with his wife Christy, a pharmacist and their daughter Gracie.

Why did you run for public office previously and for the mayor’s office this year?
Probably eight or nine years ago, my wife and I felt like we had to get involved in our homeowner’s association here in our neighborhood. And that was the beginning. I got on the board, then I became president of the HOA. I was kind of good at it, and then we had a zoning case that affected our neighborhood and I went to that and started paying attention to the issues and saw some things that concerned me. And before I knew it I was running for city council and was successful. That was a great honor and it’s been great to serve the people Johns Creek as city council representative. But now we need leadership and I am preparing for that responsibility.

You are a sitting member of Johns Creek City Council right now and you ran four years ago on the platform of preserving and protecting Johns Creek residential community from counterproductive projects and policies. Would you say that most of your agenda has been largely accomplished?
There have been things that we were not always 100% satisfied with, but for the most part, they have been very successful. There were some road widening projects that would have increased the concrete jungle through the heart of the city and would have brought many more cars through the center of our community. We have effectively stopped that. And there are some other projects– road windings to projects like high density housing that would bring a very heavy demand on infrastructure, and we have not had any high density housing, while I’ve been on council. And so, we’ve stopped a lot of the things that were counterproductive. And now it’s time for us to look forward to building Johns Creek in a constructive and positive manner for the future.

What do you see as the most important issue before the city that needs to be solved first?
We have stormwater, budget and finance issues, but to me the one thing that John’s Creek really needs is an identity.  It’s partly because of the way we were started– we were part of unincorporated Fulton County, and we became a city out of thin air. We got our name from Johns Creek Technology Park and of course we do have the actual Johns Creek that runs through the center of the community. A sense of identity is something that we need to continue to pursue our brand. There is a great opportunity to build greater community and make better quality of life for everyone. We want kids to really look back at their time growing up in Johns Creek very fondly, so they want to come back and start their own lives here. And we want their parents to want to stay and retire in Johns Creek. We have some critical mass, some strategic advantage that I think are universal languages to all people, health and wellness, arts and culture, performing arts, sports and outdoor recreation, veterans, and patriotism. I would like to see that maybe evolve into a veteran’s village of sorts. I’ve been working to try to get Georgia Military Veterans Benefits Administration here in Johns Creek. Our human capital is so great here, but I don’t feel like we are doing enough to really capitalize on it and leverage it.

You initiated Preserve Johns Creek, a group that’s dedicated to protecting residential character and quality of life. Can you elaborate on the working of this group?
It was often just me writing a newsletter, once a week, whatever particular issue, there was, you know I would try to research and provide some insight or hopefully, analysis, and not just opinion. And it seemed to resonate with residents because I think we all moved here hoping to get away from it all. You know it’s interesting we just went through the comprehensive land use plan back when I first got elected. And it’s interesting because the focus of that was to keep Johns Creek, as the suburban community from becoming not too much more urban. Of course, you want development, you want growth, it just needs to be smart and selective. I think that we can have businesses thrive, new housing, but then we can do it in a way that still preserves that character and still preserves that quality of life.

This was listed on your website and piqued my interest – it reads – “You can rest assured that I will continue to guard against overdevelopment. Only one smart selective growth that is appropriate and improves our community.” Can you elaborate on what you mean by overdevelopment and selective growth?
I give my counterparts in Alpharetta a little bit of a hard time. They’ve done a tremendous job in growing. On another hand, I think that some of the growth has perhaps outpaced the infrastructure, and it has radically changed that town. There are areas at certain times of the day where I avoid like the plague because I don’t want to get snared in all the traffic that goes along with the Avalon and sometimes, I feel like that it looks like, every piece of brown is has got a bulldozer. It’s under construction. Once this was a very quaint small town, but so much of that has disappeared. There’s something to be said for a little bit quieter, a little bit more green space. We can still have a lot of the amenities, and I think that we’re going to see that as we continue further with the town center plan.

What is your vision for Johns Creek in the next five to 10 years?
My goal for Johns Creek would be that we really take a very sober look at our value proposition. The reason most people settled in Johns Creek is to raise their family in high quality schools. It’s also a very safe community. Now a lot of that is because we have a very strong foundation from our population. We’re a very educated population. We are definitely more prosperous than the average community. And usually, when you have those things, you’re going to have the children and the schools do very well. And if people don’t have to commute to an office building in Atlanta, they’re less dependent on a commute. Then they’re free to go to places like Forsyth County, where they can get a perhaps a bigger house for less money, and the schools are just as good. And the taxes are cheaper. That’s what I’m talking about when I say we’ve got to really look at our value proposition, not just for the residents that are here now, but also for people that are looking to move into the Atlanta metro area. We want to continue to be the leader. We want to be the standout as this is the place you want to be.

What are your views about having public transportation?
We have our transportation that comes through Johns Creek. It does not seem to be very well utilized – no one on the bus or, or very few people on the bus. And, you know, that has been a decision that has largely been taken away from local communities.

The latest spa shootings of 8 Asian American women bring back the focus on hate crimes against Asian Americans. What are your plans to address this issue?
I feel very strongly that Johns Creek which is the most diverse in Georgia, or the United States of America as a whole, is really one people, one community, and that we’ve really got to come together, recognize that we are neighbors, and we should be friends. And that may sound very idealistic, but I don’t believe in the idea that people should be divided, or that people should be made to fear one another. It was very painful to see what happened with those crimes. I feel like that in the last year we have really started getting almost consumed, or we’re almost obsessed with the issue of race, and I think that we need to get back to focusing on the merits of the individual. I think most people simply want to live in an area where they can be friends with their neighbors, be respected. Just everyone’s here for the same reason– we all want to raise our families. To me, it is a universal human right that you have equal opportunities to succeed, regardless of where you’re from or what the skin color is. For us to start being so focused on these superficial things that can divide us, I think that’s a mistake and I think that’s going back into the past.

Do you see diversity on the Johns Creek Council currently?
We do have diversity if you’re looking in terms of race– Jay Lin was from Taiwan. We have mixed races on the council now. But, again, the things that seemed to really matter is, what kind of thoughts and ideas and questions and critical thinking are being brought into the council meeting, so that we can make the best decisions. If you want to have friends over for a birthday party or you’re celebrating Holi or Diwali, you are free to do those. So, you can meet people from all over the world, in Johns Creek.

But you do agree that everybody’s voice needs to have representation on the council, right?
Absolutely. But I consider myself to be a very good representative of all the people in Johns Creek, and so it doesn’t matter to me, some other skin tone than I have, I’m going to represent their interests in the city with equal vigor. Again, I try to focus on the individual.

What do you know about Indian culture?
I don’t know as much as I would like to but I’ve learned a lot. I’ve got a fairly good grasp of some of the geography. I didn’t know before that Mumbai and Bombay are the same. And so, you know how you’ve got a lot of different tribes in India. They came from different parts of the world. I do try to follow some of the politics and current events in India and of course, it’s a horrible time with COVID there right now. But hopefully, that’s going to get better soon.

Why should people vote for you?
I would love to be your mayor. I think we can make Johns Creek the best place to live, work and raise a family; that we ensure that we have the best schools; that we keep it safe; that we maintain a high quality of life; that we make it a place that is a rich community where everyone is a part and everyone has a voice.