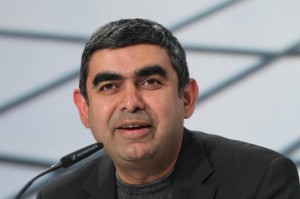 Sikka’s compensation includes an annual base salary of $900,000 and an annual variable pay of $4.18 million.

“I am grateful to investors and humbled to be appointed as the company’s chief executive. I will continue to sustain the deep-rooted cultural values the company’s co-founders have created over the years,” Sikka told reporters after the meeting.

Noting that software was redefining the world by becoming all pervasive, Sikka said he would use the opportunity to serve the various industry verticals such as banking and financial services, manufacturing, energy, oil and gas and retail.

“I inherit the intuitive knowledge of the co-founders and their culture which is defined by processes, principles and planning. We will build new software by working with our customers. In manufacturing, software is making machines run automatically,” he said.

Asserting that the outlook for the IT services industry was good, Sikka expressed confidence in steering the company through the challenges it was facing and by leveraging the tremendous opportunities the new software was unfolding.

“The outlook for the IT services is good. I am confident of the future,” he said.

Though Sikka will continue to live in California on the US west coast where his family stays, he will travel to Bangalore as and when required by the company’s board.

“During this visit, I am going to the Infosys campus at Mysore (140 km from Bangalore), where we have a great university and knowledge centre. I will spend time with trainees and learn the extraordinary things the leadership institute has built,” he said.

Sikka, who quit SAP in May, was responsible for all products, including HANA, the German behemoth’s flagship analytic database platform, mobile and middle. He has a doctorate in computer science from Stanford University in the US.

Murthy, who returned from retirement to head the company again June 1, 2013, will continue as non-executive chairman till Oct 10 and will be re-designated chairman emeritus in recognition of his extraordinary contributions to the company.

Kamath will be the non-executive chairman of the board from Oct 11.